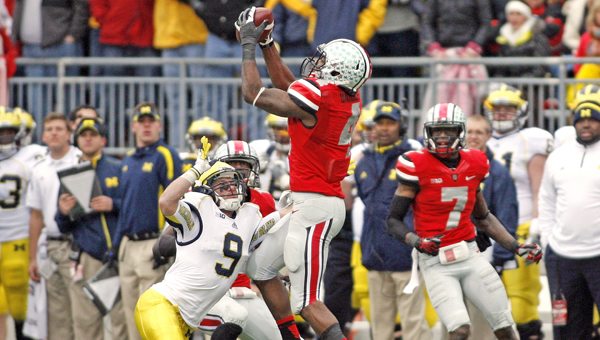 Ohio State’s C.J. Barnett (4) intercepts a pass intended for Michigan’s Drew Dileo (9) during last season. Barnett and the other Buckeyes are expecting a tough week of practice. (MCT Direct Photo)

COLUMBUS (AP) — Ohio State’s players are embarking on the equivalent of a weeklong obstacle course.

“This next week is tough,” coach Urban Meyer said on Sunday. “We’ve got nine practices in six days. The 2013 Ohio State Buckeyes will be determined by this week coming up.”

It’ll be a grueling test. The Buckeyes are just hoping to get through the workouts held a half mile or so away from the team’s usual home base at the Woody Hayes facility.

To a man, they talk about simply surviving what figures to be a torturous time.

“Two-a-days are built for you to get tougher mentally because physically your body is just going to get broken down,” defensive lineman Michael Bennett said. “That’s the whole goal. Physically, yeah, we’ll be tougher. We’ll be able to withstand more pain like you expect a football player to do. Mentally, though, that’s what it’s all about.”

To give the workouts a different feel, they’ll take place at a temporary camp set up off Ackerman Road, just west and north of the faux-grass fields where the team usually plays.

Temperatures are expected to be moderate, in the 70s most days. But that doesn’t mean it will be a day in the park for the Buckeyes.

With a glint in his eye, Meyer calls the week’s work “awful” — yet he doesn’t plan on making it any easier.

“There’s a lot of reasons why we do it but the most important one is you have to feel bad before you feel good and appreciate what you’ve got,” he said.

Ohio State has already gone through several practices, so everyone should know what to do and where to go. But the workouts this week are bigger, longer, harder hitting and more focused.

“I thought right now was awful,” he said last week. “That just means it’s going to get even worse. We have to be prepared.”

This is a time when the players’ conditioning is honed, technique is perfected and plays are learned. But, most importantly, the players are drawn closer by what they have gotten through together.

“You want to see guys push through,” defensive line coach Mike Vrabel said. “You understand that they’re going to be tired, they’re going to be exhausted, the defense mechanisms are going to break down. You want them to give themselves to the team and to each other and go out there and be mentally and physically tough.”

There are different kinds of toughness, of course.

A year ago, in Meyer’s first year in Columbus, there was more hitting and more one-on-one duels. He didn’t know the personnel, but wanted to pinpoint players who wanted to compete rather than just memorize the playbook and go through the motions on the field.

“He was trying to break us down more,” Barnett said. “This year he knows what we can do, he knows the kind of guys that he has. It’s more concentrating on football instead of being out there and making us go at it and see who’s tough.”

The week ahead will likely come down to players looking inside themselves and producing even more effort.

“It’s a big grind. Going over to Ackerman, two-a-days, the heat of August,” offensive guard Andrew Norwell said. “You just have to grind and guys have to stay focused. You basically have to get your mind right for that.”

CHICAGO (AP) — The Cincinnati Reds aren’t hitting much and their bullpen is tired. Mat Latos made sure they wouldn’t... read more