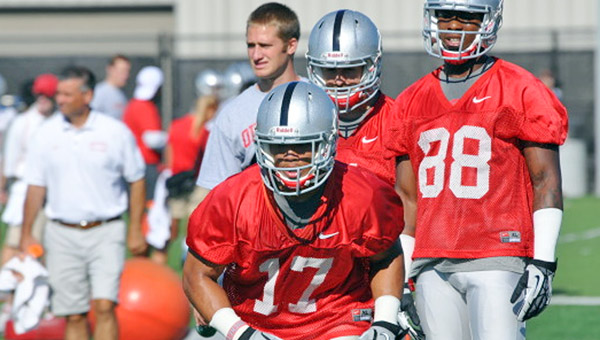 Ohio State freshman cornerback Devonte Butler (17) goes through preseason drills. The Buckeyes are in the midst of their fall camp in preparation of the upcoming season. (Photo Courtesy of The Ohio State Buckeyes Sports Information)

CHICAGO (AP) — J.J. Hoover put together his own birthday party at Wrigley Field on Tuesday night. He grabbed another scoreless outing for a present, and the Cincinnati Reds got a big win.

Hoover provided terrific relief work on his 26th birthday and Shin-Soo Choo hit a tiebreaking two-run single in the 11th inning, leading Cincinnati to a 6-4 victory over the Chicago Cubs.

“The bullpen did a great job again,” Reds manager Dusty Baker said. “Hoover did an outstanding job, got a much-needed win considering how he started the season. You know, we just played good baseball.”

With no outs and the bases loaded, Choo jumped on the first pitch he got from Eduardo Sanchez (0-1) and lined it into the gap in right-center. Ryan Ludwick and Devin Mesoraco came around to score.

Sanchez walked the first two batters of the inning and Cesar Izturis reached on an error by third baseman Donnie Murphy to set up Choo’s clutch hit.

“I tell myself (be) aggressive (for) last at-bat, so I just swing at the first pitch,” Choo said.

Nate Schierholtz, Dioner Navarro and Murphy homered for Chicago, which was shut out in each of its previous three home games. Schierholtz’s two-run drive in the second snapped a franchise-record home scoreless stretch at 33 innings.

“It was just a small mechanical adjustment that I made mid-year, and it’s helped me out,” he said.

Aroldis Chapman finished for his 29th save in 33 chances, closing out Cincinnati’s third consecutive win and sixth in seven games. The Reds also improved to 14-1 in their last 15 games at Chicago’s cozy neighborhood ballpark.

David DeJesus had a leadoff single in the 10th for the Cubs, but Junior Lake popped up a sacrifice attempt and Hoover turned Anthony Rizzo’s comebacker into an inning-ending double play.

Brandon Phillips had three hits and stole two bases, helping Cincinnati build a 4-2 lead. But Navarro led off the fourth with a drive just past the foul pole in right for his career-high 10th homer, and Murphy tied it with another leadoff shot in the seventh.

The three homers allowed matched a career high for Homer Bailey, who gave up six hits and walked three in 6 1-3 innings. He had won each of his previous two starts.

“My command was just terrible tonight,” he said. “Just one of those nights, I just didn’t have good stuff at all. Never really felt like I was in a groove.”

Jeff Samardzija yielded six hits and walked four in six innings, extending his winless stretch to five games. The right-hander was coming off a disastrous outing at Philadelphia, when he gave up nine runs and 11 hits in just 3 1-3 innings in a 12-1 loss.

“I felt good out there. If I had to go back to anything, it was the first-pitch strike,” Samardzija said. “I felt like I was behind the count a lot tonight. Even when they are taking a pitch. That’s a big pitch, the first of an at-bat. You want to jump ahead in the count and be aggressive.”

The unseasonably cool night began with the Cubs holding a pregame ceremony to honor Hall of Famer Ernie Banks, who will receive the Presidential Medal of Freedom in a November ceremony at the White House. It’s America’s highest civilian honor for contributions to society.

Fellow Hall of Famer Billy Williams paid tribute to his longtime friend with team chairman Tom Ricketts standing nearby, and the 82-year-old Banks waved to the crowd as it saluted “Mr. Cub” with a long ovation.

“It’s amazing,” Banks said. “It means everything to me. Life if is just wonderful. When you do things to help people and share things then it comes back to you. I just worked hard and to try to do my best, loved the players, love Wrigley Field, love all the players.”

NOTES: It was Ludwick’s second appearance since he tore cartilage in his right shoulder while sliding headfirst into third base on opening day. … It looks as if Jorge Soler, one of Chicago’s top prospects, could be done for the season. The Cuban outfielder is sidelined with a stress fracture in his left leg. “Fall league’s still very much a possibility,” president of baseball operations Theo Epstein said. “Minor league season is looking like it might not happen at this point.” The 21-year-old Soler signed a nine-year, $30 million contract with the Cubs last year. … RHP Jake Arrieta, who was acquired in a July trade with Baltimore, could be back up with the Cubs soon. “Yeah, we’re getting close to that point,” Epstein said. Arrieta is 2-2 with a 3.56 ERA in seven starts with Triple-A Iowa. … Cubs LHP Chris Rusin (2-1, 3.08 ERA) and Reds RHP Bronson Arroyo (10-9, 3.51 ERA) are scheduled to pitch on Wednesday.