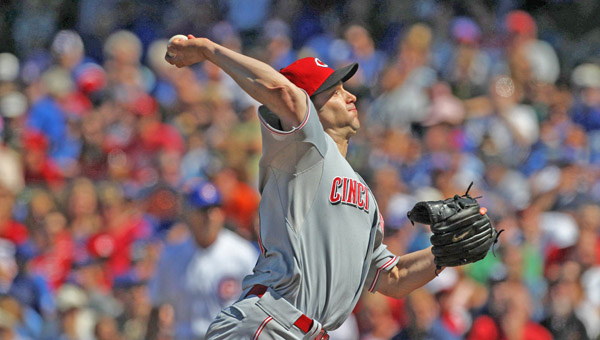 Cincinnati Reds starting pitcher Bronson Arroyo works against the Chicago Cubs at Wrigley Field in Chicago on Wednesday. The Reds won 5-0 as Arroyo allowed only two hits in seven innings, striking out seven and walking none. (MCT Direct Photos)

CHICAGO (AP) — Most of the swings looked a little off, and many missed the ball entirely. The infielders gobbled up the grounders, and the outfielders had an easy afternoon.

This was Bronson Arroyo at his baffling best.

“It’s unbelievable the way he pitches,” Frazier said. “I just can’t understand how he does it and everybody’s off balance and I know I’m going to get ground balls so I’m ready all the time and he starts striking guys out.

“It’s pretty cool to watch and see a guy like that just work his craft.”

Arroyo (11-9) allowed two hits, struck out seven and walked none in his second straight win. The sneaky right-hander retired his first nine batters and faced the minimum through six innings.

Frazier also had one of Cincinnati’s four run-scoring doubles as the Reds (68-52) earned their fourth consecutive win to move a season-high 16 games over .500. They improved to 13-3 against the Cubs this year, including a 9-1 mark at Wrigley Field.

The defending NL Central champions have won seven of eight since an embarrassing 15-2 home loss to St. Louis on Aug. 4. They trailed division-leading Pittsburgh by 3 1/2 games at the start of the day, with the Pirates scheduled to face the second-place Cardinals on Wednesday night.

“Sometimes a team has to hit rock bottom before you can start rolling,” manager Dusty Baker said.

The Cubs wasted a solid start by Chris Rusin (2-2) in their fourth straight loss. The left-hander allowed two runs and three hits while throwing just 76 pitches over six innings.

“I was able to keep the ball on the ground for the most part and when the balls were hit in the air, besides Frazier’s, the wind knocked it down,” Rusin said.

With Chicago struggling to score against Arroyo, manager Dale Sveum had Starlin Castro hit for Rusin with two out and none on in the sixth. Castro flied out to left, and Zack Cozart hit an RBI double off Carlos Villanueva in the seventh to give Cincinnati a 3-0 lead.

David DeJesus rolled a leadoff single into center field in the fourth for Chicago’s first hit, but was promptly erased when Darnell McDonald bounced into a double play. McDonald singled off the glove of second baseman Brandon Phillips in the seventh and was stranded when Arroyo retired the next two batters.

Alfredo Simon worked a perfect eighth and Jonathan Broxton finished the two-hitter for Cincinnati’s 13th shutout of the season.

“To get shut out and get nothing going at all today, it’s frustrating,” Sveum said. “It’s frustrating for the guys in the clubhouse, too. They’re plugging away the best they can.”

Arroyo improved to 13-9 with a 2.92 ERA in 30 career games against the Cubs, including wins in each of his last four starts. He has been quite good at Chicago’s cozy neighborhood ballpark, with an 8-3 record and a 2.83 ERA in 15 appearances.

“I’ve been comfortable in this ballpark for a long time for some reason, definitely the last probably seven years,” he said. “It’s just a lineup that a lot of times I’m comfortable against.”

Frazier helped the Reds get off to a fast start when he drove Rusin’s third pitch over the wall in left and onto Waveland Avenue. It was Frazier’s first homer since July 1 against San Francisco and No. 11 on the year.

“Start the game off with a little bang, that’s always a good look for me to get going for the day,” he said.

Frazier and Joey Votto had consecutive RBI doubles in the eighth to cap the scoring.

NOTES: Chicago has been shut out 10 times this season. It managed just six hits in a 2-0 loss in the series opener on Monday. … Reds CF Shin-Soo Choo got the day off. Baker said he wanted to give him some rest, and he’s also dealing with a hand issue. Baker declined to specify which hand is bothering Choo. … RHP Jake Arrieta will come up from Triple-A Iowa to start Chicago’s game against St. Louis on Friday. The move put Villanueva in the bullpen. … Baker said he’s not counting on the return of LHP Sean Marshall, who went on the disabled list May 24 with a sore pitching shoulder. “You can’t expect things, that way you’re going to be disappointed,” Baker said, “and if you get them back, then you’re elated.” … The Cubs are off Thursday before beginning a three-game series against the Cardinals. … The Reds send LHP Tony Cingrani (5-2, 2.87 ERA) to the mound on Thursday for the opener of a four-game series at Milwaukee. RHP Kyle Lohse (8-7, 3.26 ERA) is expected to start for the Brewers.