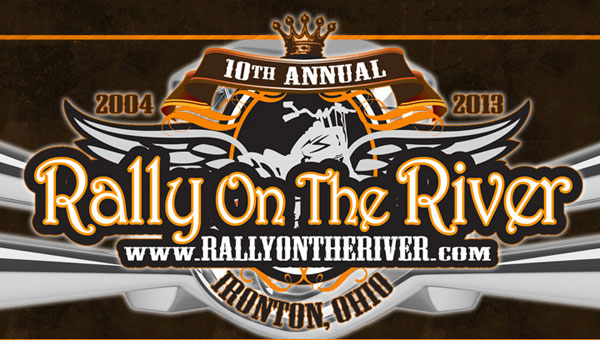 The Rally on the River kicked off its 10th year of bringing bikes, music and entertainment to Ironton.

The Rally on the River is getting revved up today, kicking off its 10th year of bringing bikes, music and entertainment to Ironton.

Running through Saturday, the event hosted by the Friends of Ironton grassroots civic organization draws tens of thousands to people to the Tri-State each year with the intent to inject life into the economy and raise money for the group’s projects including the restoration of the Ro-Na Theater.

Music is a big part of the event, with national acts this year that include country star Shooter Jennings, hard-rocking band Puddle of Mudd, Geneva, Nonpoint, Pop Evil, Get the Led Out, a Led Zeppelin tribute band; Earth Quakers, Hellyeah and more. All bands perform on the stage at Depot Square near the former Austyn’s restaurant.

For the complete schedule, visit www.rallyontheriver.com.

Vendors began setting up on Washington Street today. The rally grounds along Second Street and at Depot Square opened at 11 a.m. The music starts at 3 p.m. each day with a variety of entertainment scheduled throughout.

The partially renovated Ro-Na will open its new bar to the public. The green room, accessible from the Second Street side, will also be open as a general store, selling T-Shirts, hats, biker pins, water and soda.

In addition to the events going on downtown, Ironton Hills will be a hub of activity — with a patriotic flair.

The Ohio Flags of Honor and The Moving Wall, a half-sized replica of the Vietnam Veterans Memorial in Washington, D.C., will be the main attractions there all weekend. Opening ceremonies for the two displays will be 7 p.m. today

An event that always wows spectators, the American Motor Drome Wall of Death Thrillshow show starts at 1 p.m. today with shows all weekend. Professional bikers perform acrobatic riding on the inside wall of a round wooden structure.

A bike show and car cruise-in will roll into Ironton Hills Friday. Registration starts at 5 p.m. and the show runs from 6 to 9 p.m.

The annual poker run will begin at noon Saturday and leave from the Ro-Na parking lot. The ride is 62 miles led by Bikers for Christ. The ride will stop for a break at Hog Heaven BBQ restaurant in Willow Wood. Registration for the ride begins at 11 a.m. today, 1 p.m. Friday and at 9 a.m. Saturday

The Parade of Heroes will begin at 5 p.m. Saturday and be led by the American Legion Post 433. The ride departs from the Ironton Hills Shopping Center.

Help for those raising grandchildren

Did you know that the Area Agency on Aging District 7 (AAA7) can provide support and assistance for grandparents who... read more