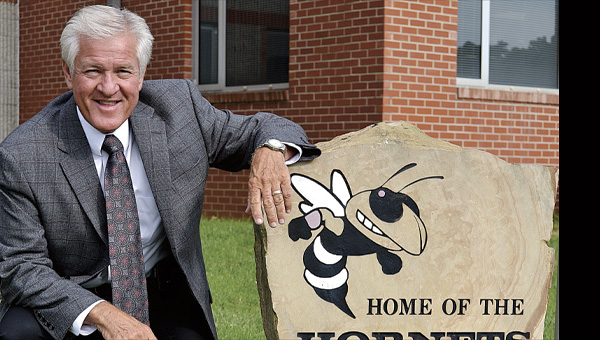 Although Wednesday meant it was back to school for Dawson-Bryant students, it was also the first day with classes actually in session for new superintendent George York. The longtime educator who has held a variety of positions over nearly five decades was hired July 1 after Dennis DeCamp retired.

There isn’t much George York hasn’t seen in his 50 years as an educator, but he still manages to get excited about his job.

York took over as Dawson-Bryant Superintendent on July 1 and has already implemented some changes to a district that had 1,217 students last school year. More changes are expected in the foreseeable future.

“In the short time I have been here we have hired a new middle school principal and have changed from a blocked schedule to an eight-period day,” York said. “I plan to move us toward being a very curriculum-oriented district.”

York, who was born in Ironton but grew up in South Point, has done just about everything in his career, from serving as superintendent for South Point School District, teaching seventh and eighth grades and being the principal of both high and middle schools.

He was the first of 16 children who went to college and getting an education has molded him into believing in education.

“My job is to be the instructional leader and provide faculty and staff with tools such as professional development materials and provide the initiative to get educators more involved in research-based teaching,” York said. “I want to emphasize the academic movement.”

When hired as Dawson-Bryant Superintendent, York was working as an educational consultant for the Ross-Pike Educational Services District. He replaced Dennis DeCamp, who retired effective June 30 after Ohio’s retirement plan changed. DeCamp was superintendent for nearly five years.

“My main objective is to ensure that when our kids walk across the stage at graduation, they are ready for the next level,” York said. “I am trying to move our district in that direction.”

Even after 50 years, York says he still “gets excited” about every school year, and this year is no different.

“I have never lost the passion for my work and I love the challenges,” York said. “The good thing about being superintendent is I am in a position to really make a difference across the district”

Another one of York’s goals is to be involved as much as possible.

“By being in the buildings and in the classrooms I will be able to determine what everyone needs to be as effective an educator as possible,” he said. “It is a collaborative effort and I can’t wait to get started.”

York has been married to his wife, Deborah, for 32 years, and she is an educator as well, working as a teacher and now with the state support team. They have four children and nine grandchildren.

Pedro man faces 10 years in prison   A Pedro man will spend the next decade in prison as punishment... read more