A path to healing 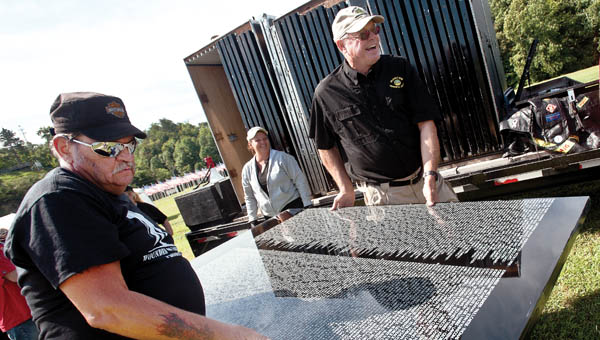 Anyone who attended the opening ceremonies for the Moving Wall and Ohio Flags of Honor Thursday evening could see that the half-sized replica triggered strong emotions from the crowd gathered at the Ironton Hills Shopping Center.

For many Vietnam veterans, standing before the glossy black panels that memorialize more than 58,000 fallen soldiers’ names is a healing experience.

Many haven’t had the opportunity to travel to Washington, D.C., to see the original Vietnam Veterans Memorial. Anyone who attended the opening ceremonies for the Moving Wall and Ohio Flags of Honor Thursday evening could see that the half-sized replica triggered strong emotions from the crowd gathered at the Ironton Hills Shopping Center.

The Moving Wall and Flags of Honor were escorted into Ironton Thursday morning by a motorcade of hundreds of motorcycles, law enforcement, emergency and fire vehicles. The wall took about two hours to assemble with a team of volunteers.

Organized by the American Legion Post 433, this is the first time the Moving Wall has come to the area. On it are 16 names of soldiers who were Lawrence County residents.

Ted Riedel, committee chairman for the flags and wall, said it took him two years to get the Moving Wall in Ironton.

“I wasn’t sure we’d ever get the wall here,” Riedel said.

During the opening ceremonies, Vietnam War Purple Heart recipients Jim DeLong and Charlie Meadows spoke about the patriotism of Lawrence County and the turnout for the event.

“It shows in our Tri-State area what kind of patriots we have and the support of our troops,” DeLong said.

Mayor Rich Blankenship addressed the crowd, applauding all the groups who worked together to bring the memorials to Ironton.

“They sure got the name right — Moving Wall,” Blankenship said. “It sure moved me.”

Blankenship also told the crowd at the next city council meeting on Aug. 22, Ironton would be proclaimed a Purple Heart City.

In conjunction with the wall, the Ohio Flags of Honor returned to Ironton for the third year. The display has 288 flags — one for each Ohio soldier killed in Iraq and Afghanistan. Three of the flags represent Lawrence County residents — Sgt. Justin B. Allen, CWO Theodore U. Church and SSgt. David H. Ford IV.

There were hundreds more support flags donated by organizations and families, 700 in total.

“Every single name on that wall and on the flags represents a potential unrealized and a dream undreamed,” Evans said. “… Everyone was special to someone.”

There is also a 1955 Chevy Dragster tribute car with the names of all the POW/MIA soldiers from the Vietnam War on display.

All three displays are available for viewing 24 hours day and have around-the-clock security. There are also volunteers on hand to look up names and panels on the Moving Wall.

ASHLAND, Ky. — When Melissa Burns got a morning call from work Thursday, she was hoping her boss wanted her... read more