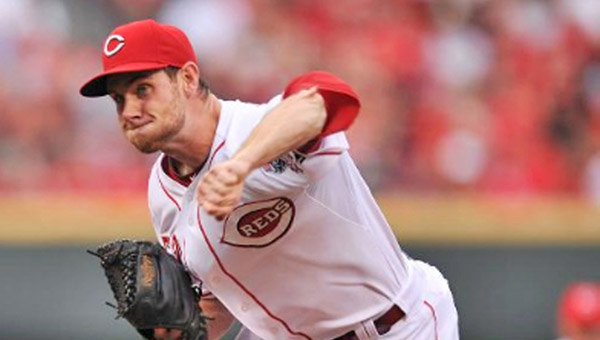 Cincinnati rookie left-handed pitcher Tony Cingrani left Tuesday’s game in the fourth inning with a strained lower back. Cingrani has pitched well for the Reds who are missing ace Johnny Cueto who has been out with an injury most of the season. (The Tribune / MCT Direct Photos)

CINCINNATI (AP) — With their lineup finally intact, the Reds have a new concern. Left-hander Tony Cingrani is hurt, leaving their rotation in flux.

Cingrani had to leave in the fourth inning because of a strained lower back, and the Arizona Diamondbacks rode Paul Goldschmidt’s grand slam to a 5-2 victory on Tuesday night.

Cincinnati lost for only the fourth time in its last 14 games. The bigger concern is Cingrani (6-3), who has been filling in while Johnny Cueto tries to come back from soreness behind his pitching shoulder that has sidelined him most of the season.

“We certainly can’t afford any more injuries to our starting staff, especially going down the stretch,” manager Dusty Baker said. “He was throwing the ball so well.”

Cingrani retired the first 10 batters before Martin Prado hit his 12th homer. One out later, Aaron Hill doubled off the wall in left-center, extending his hitting streak to 13 games. That’s when Cingrani informed Baker and a trainer that his back has been bothering him lately and was getting worse.

“It finally bothered me enough that it was noticeable,” Cingrani said. “I felt it before. It came on gradually. It hasn’t been this bad.”

He hadn’t told Baker or the coaches about his back, trying to pitch through the problem.

“He said it’s been bothering him on and off for the last couple of weeks,” Baker said. “He didn’t tell me. These young guys want to say in the big leagues and stay in the rotation.”

The defending NL Central champions were feeling good about getting their starting lineup back to full strength with Ryan Ludwick’s return last week from a shoulder injury that had sidelined him since opening day. Now, the rotation is a question as they try to overtake Pittsburgh and St. Louis.

The game got away in the eighth inning, when Goldschmidt set a Diamondbacks record with his third grand slam of the season and became the first NL player to drive in 100 runs.

Goldschmidt connected in the eighth inning off J.J. Hoover, ending the reliever’s streak of 23 scoreless appearances. His 31st homer tied him with Pittsburgh’s Pedro Alvarez for the NL lead. All of his career grand slams have come this season.

Goldschmidt worked Hoover to a full count and got the fastball he expected with the bases loaded.

“I’ve faced Goldy a bunch of times in the minors, and you can’t leave a pitch up like that,” Hoover said. “If it’s down, who knows what would have happened.”

The left-hander shut down the Reds’ left-handed threats — Shin-Soo Choo, Joey Votto and Jay Bruce were a combined 0 for 12 with seven strikeouts.

“Very rarely do you see anybody make Joey look like that,” Baker said.

The Diamondbacks evened their series at a game apiece and moved five games behind the Reds for the final NL wild card berth. Arizona has won six of its last eight games.

Cingrani’s injury spoiled a matchup of left-handers born two weeks apart in July 1989. Corbin, who is two weeks younger than Cingrani, kept the Reds off-balance with his slider.

The Diamondbacks are 21-4 when Corbin starts. He has allowed two runs or less in 19 starts this season, tied with the Dodgers’ Clayton Kershaw for most in the NL.

He got a few words from Choo after throwing a chin-high fastball to the leadoff hitter in the sixth. Plate umpire Jerry Meals stepped in, Choo pointed to chin and said something, then got back in the batter’s box without further complaint and struck out.

Notes: Fans brought more than 600 dogs to the game as part of an annual pet promotion. No fireworks were set off on Heisey’s homer so as not to scare the dogs. … Goldschmidt’s 100 RBIs match Adam LaRoche’s club record for a first baseman. … Diamondbacks C Miguel Montero, on the DL since Aug. 1 with a strained lower back, felt fine a day after he caught five innings on a rehab assignment. He got the day off and will catch again on Wednesday. … RH Brandon McCarthy (2-7) starts the third game for Arizona, trying to emerge from a slump. He’s 0-4 with a 6.41 ERA in his last four starts. The Reds go with RH Mike Leake (10-5), who has a 6.12 career ERA against Arizona.