Homolka settles in at his new job as Fairland coach 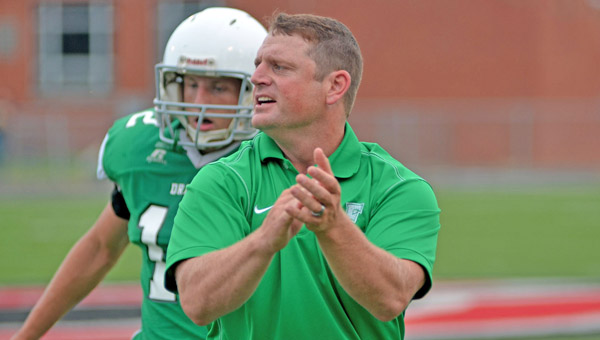 Homolka spent the 2009 football season with Marshall University as the football quality control assistant where he helped coordinated recruiting and also served as the high school relations liaison.

Homolka left to join the University of Charleston staff and then went to Northern Illinois last year.

Now he is back in the Tri-State as the new head football coach of the Fairland Dragons.

“My wife is from here and I needed to settle down. I’ve been all around the country. I love it here. I love the community,” said Homolka.

A former fullback and special teams player for the Jayhawks, Homolka graduated from Kansas in 2006. Homolka coached at Washburn University in Topeka, KS. He coached running backs and receivers and helped the Ichabods reach the NCAA Div. II playoffs in 2007.

He was on the Thundering Herd staff during the 2009 Little Caesar’s Pizza Bowl championship team.

He coach at the Charleston from 2008-11 and then took a graduate assistant’s position at Northern Illinois last season working with the defensive line. The Huskies won the MAC and earned a BCS berth in the Orange Bowl against Florida State.

“Coaching in the Orange Bowl was a dream come true,” he said.

Homolka and his wife, the former Kristin Ritter, have two children, son Trey, 13, and daughter Abigail, 11.

CINCINNATI (AP) — Ryan Ludwick had a bag of ice wrapped on his right shoulder, the one that’s prevented him... read more