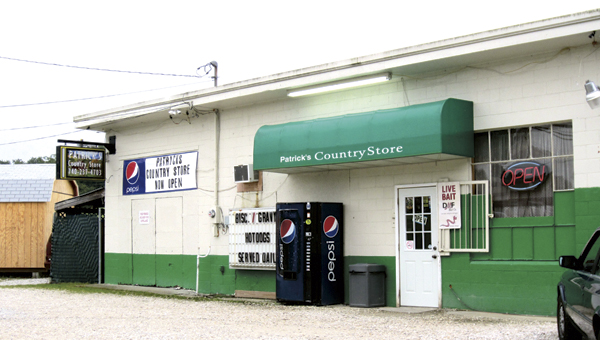 The façade of Patrick’s Country Store in Deering is indicative of owners Teresa and Joel Patrick’s intention to do business the old-fashioned way.

As big-box stores and super-retailers continue taking over American consumerism, a small piece of Americana remains on state Route 243 in Deering.

Patrick’s Country Store opened on Nov. 10, 2012, and co-owners Teresa and Joel Patrick have made many efforts for their business to be a one-stop shop for its customers.

One of the biggest conveniences provided by Patrick’s is hay, grain and feed for animals. Teresa said she also sells a lot of dog food, particularly to hunters.

Patrick’s has added a deli in the short time since it opened, and offering daily specials and home-cooked meals is one thing becoming synonymous with Patrick’s.

“Our business is picking up every day,” Teresa said. “Our goal is to keep moving up and on. The deli, the feed and the dog food are really popular among customers because we are so far out of town.”

Eight employees are charged with the task of operating Patrick’s. It’s shelves are jam-packed with everything one could expect at a general store such as groceries, tools, coffee, newspapers and other publications, live bait, over the counter medicine and fresh meats and cheeses, just to name a few.

“We have just about anything anyone needs, but we are still a work in progress,” she said. “We keep adding items as we go on and ask people ask for them. If enough people ask for something, we will start carrying it.”

Although one of the newer offerings from Patrick’s, one of the most popular has also become Yard Cards, large letters, numbers and symbols erected in yards to mark birthdays, anniversaries and other events.

“Being right across from the school is a big deal when it comes to the yard cards,” Teresa said. “We put up yard cards for someone’s birthday and the kids all get to see it when they’re on the playground. They really like that.”

The idea for the business came about when it looked as if Joel was going to lose his job.

“My in-laws, Mary Sue and Ralph Patrick, have owned this building for years,” she said. “They have leased it out several different times to different people. When we found out Joel’s job was in jeopardy, we made the decision to open the store.”

Joel did lose his job eventually, but has since become the program director at the Children’s Center of Ohio. Teresa is a former social worker who recently completed her coursework to become a registered nurse, but just prior to doing so was in a car crash. She said she may go to work as an R.N. someday, but for now, it’s all about the store for the Patricks.

“My goal is to keep growing,” Teresa said. “We have 40 acres of land here to grow on. We are just getting our feet wet with this place.”

CHESAPEAKE — The medical field continues to grow, and students at Collins Career Center are getting a leg up on... read more