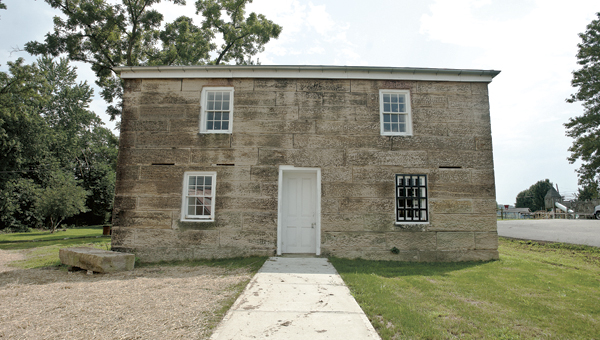 BURLINGTON — The Historic Jail Preservation Corporation is again attempting to lock up some money for Lawrence County’s bicentennial project.

Last fall the corporation held a “Jail or Bail” event where warrants were served on Lawrence County politicians and business people. Those who got served had to pay bail to get out of jail. Lawrence County Commissioners and clerk of courts matched the money raised.

“Our goal is to renovate Lawrence County’s first jail,” Edna McClain, one of organizers of the fundraiser, said. “We raised enough money last year to renovate the second floor, but we still have lots more to do.”

According to McClain, the corporation anticipates the building becoming a museum, community center or some type of educational tool.

The building still has to be insulated, heating and air installed and other renovations before the building will meet code, McClain said.

“We want to raise as much as we can,” McClain said. “Aside from the required renovations, we would like to maybe add a kitchenette so community meetings can be held there. The more money we raise this time, the less we have to raise in the future. I would like to see this be our last fundraiser.”

The theme of this year’s fundraiser is “Jailhouse Rock.” It is an Elvis Presley impersonator competition among Lawrence County schools students.

The event will be on the afternoon of Saturday, Oct. 19, in front of the jail building in Burlington. The top-three contestants will receive cash prizes of $100, $50 and $25 respectively.

McClain said once the corporation has a certificate of occupancy in hand, the fundraising efforts would be complete.

Letter grade scale to be in place by 2015   The Ohio Department of Education launched a new report card... read more