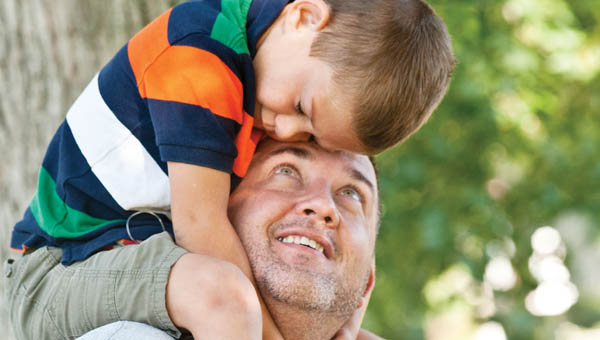 Five-year-old Brad Mullins sits on the shoulders of his father, Ben Mullins.

Family part of fundraiser to find cure for diabetes

PEDRO — The upset stomach that their 18-month-old had didn’t worry Melanie and Ben Mullins that much at first. Ben was just getting over the flu. But soon the persistent vomiting had them taking their baby, Brad, to the nearest emergency room.

“We thought he had a stomach bug because my husband had been sick,” Melanie said. “But we thought he was getting dehydrated. He had thrown up so much and was so tiny.”

At the emergency room, typical blood work was performed.

“A few minutes later they came back and said that the blood sugar was well over 700,” Melanie said.

Within a half-hour the family was headed to Cabell Huntington Hospital for weeks of care. Brad was diagnosed with Type 1 juvenile diabetes.

Today, however, living with diabetes is a way of life for Brad, now 5, and his family.

“Now it is just an everyday thing,” Melanie said. “It is common that when we sit down to eat, before we do, we test.”

Insulin shots have been replaced with a pump that makes part of the daily care a little easier, but mostly it’s the attitude of her son that has made caring for the disease less of a struggle.

“He is wonderful,” Melanie said. “You wouldn’t know there was a thing wrong with him, unless people point it out. He’ll say, ‘That’s my pump’ and goes on. He doesn’t give them time to ask.”

But making sure others don’t have to go through the experience their family has is why Melanie and Ben are participating in the upcoming Big Sandy North 2013 Walk to Cure Diabetes on Saturday, Sept. 14 at Central Park in Ashland, Ky.

The goal is to raise money for a cure for Type 1 Diabetes.

“This is in honor of our son for Juvenile Diabetes Foundation,” Melanie said. “It is to bring awareness to the disease for all these babies to be well and not have to deal with pumps and worry about carb intake. This is a lifelong thing.”