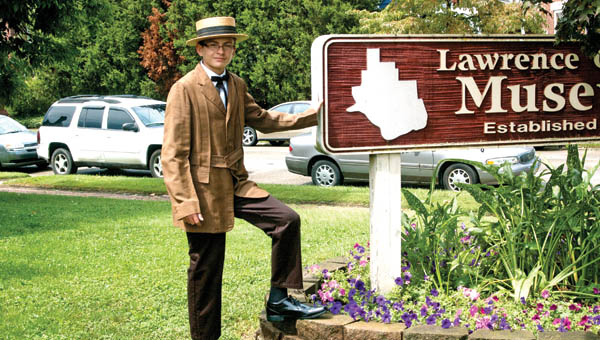 Thirteen-year-old John Higgins comes by his love of history naturally. His grandmother, Kay Rader, is well-known in the Ironton community for her portrayal of Nannie Kelley Wright, the only female ironmaster and at one time the second richest woman in the world.

Later this month Higgins can test out his acting skills as he presents his portrayal of Capt. James W. Slater, one of two new characters to join the annual Historical Walk at Woodland Cemetery hosted by the Lawrence County Historical Society.

Slater, who died in 1929 at the age of 86, was a druggist and Civil War veteran who came to Ironton from Beverly in 1870. He went into business with Bartram and Powers on Second Street and Park Avenue and Howard Norton on Center Street. He also ran a drugstore under the name of Slater, Kirkger and Wilson.

“I liked Slater because he was a Civil War veteran and a pharmacist,” John said. “I love history. It comes to me so easily. I could sit and hear the stories all day.”

John, a seventh grader at Symmes Valley school, first saw the Historical Walk and his grandmother’s performance when he was 10.

“I think it’s great to get to hear about a life and see their tombstone and really find out how they lived,” he said.

Joining Slater’s character will be the portrayal of World War I fighter pilot, Col. William Lambert. Presenting Lambert, who shot down 22 enemy aircraft in 1918, will be Bob Long with assistance from Bill Martin, both from Ashland, Ky.

Lambert’s war record was only surpassed by Col. Eddie Rickenbacker, who had 26 victories.

Every fall members of the Lawrence County Historical Society and volunteers from the community present the history of the county by telling the stories of those who are buried in Woodland Cemetery through re-enactments.

Re-enacters typically stand by the individual’s gravesite. However, the mausoleum that houses the remains of Lambert and his wife is on the Coal Grove side of the cemetery and has always been considered too far away from the sections that are used in the Historical Walk. This year Lambert’s story will be told at a site away from his final resting place in the sections where the rest of the walk takes place.

Long will portray Lambert in the costume of a WWI pilot while Martin will provide additional background information that he gained as a close friend of Lambert over the last decade of the pilot’s life.

Also part of the Historical Walk will be Rader who will reprise her portrayal of Nannie Kelley Wright. Rader will perform on the walkway to the Kelley mausoleum. Another popular character will be James Ditcher, an African-American abolistionist, who will be portrayed by Chris Saunders and Ditcher’s wife by Jackie DuFore.

Back after a two-years hiatus will be the characters of Dr. Joseph Lowery and his wife, Sarah Jane, to be presented by Bob and Cheryl Cleary. Ironton founder John Campbell and his wife, Elizabeth, will be portrayed by Stephen Jenkins and Carol Kitts.

The Historical Walk will be on Saturday, Sept. 28, from 5 to 8 p.m. Admission is free but a program with the cemetery map can be purchased for $2 with proceeds going to the museum.

Down, but not out

Michael Hampton, 42, sits in a folding chair outside his tent on a field on the Ironton side of the... read more