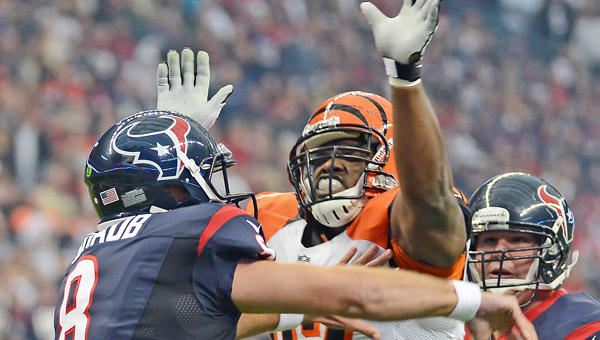 Geno Atkins (97) of the Cincinnati Bengals pressures Matt Schaub (8) of the Houston Texans. Atkins and the Bengals agreed to a five-year contract extension on Monday. (MCT Direct Photo)

CINCINNATI (AP) — The Bengals signed defensive tackle Geno Atkins to a five-year contract extension on Monday, locking up one of their best defensive players through 2018.

The All-Pro tackle, a fourth-round pick in 2010, was entering the final year on his original deal. He made the Pro Bowl each of the last two seasons. Atkins had 12 1/2 sacks last season, the most by any interior lineman in the NFL.

Cincinnati has spent more than $180 million since the end of last season keeping the team intact. The Bengals have reached the playoffs each of the last two seasons as a wild card, only to lose to Houston in the first round.

The Bengals had a lot of open space under the salary cap heading into the offseason. Rather than go after free agents, they decided to keep their own players. Linebacker James Harrison was the only major free agent signing.

“The cap space is there to use, and we’ve continued to use it,” coach Marvin Lewis said. “And we have a couple more to do as well. That’s the thing: The team has really stepped up. By my mere layman calculations, we’ve been one of the top four or five teams in the league in spending. That’s a big deal.

Atkins is the 12th Bengals player to get either a new contract or an extension since the end of last season.

“It means a lot to know that they believe in me,” Atkins said. “They drafted me in the fourth round and they believed in me. That’s going to show the younger guys that if you do the right things on and off the field, that you will be rewarded, too.”

Cincinnati has put emphasis on retaining a defense that has finished in the top 10 each of the last two seasons. The Bengals have signed linemen Carlos Dunlap, Robert Geathers, Wallace Gilberry and Michael Johnson; cornerbacks Adam “Pacman” Jones and Terence Newman; and linebacker Rey Maualuga to new deals since the end of last season.

Atkins has quickly developed into one of the Bengals’ top defensive players. He’s content to let others get the attention, preferring a soft-spoken approach he doesn’t think will change.