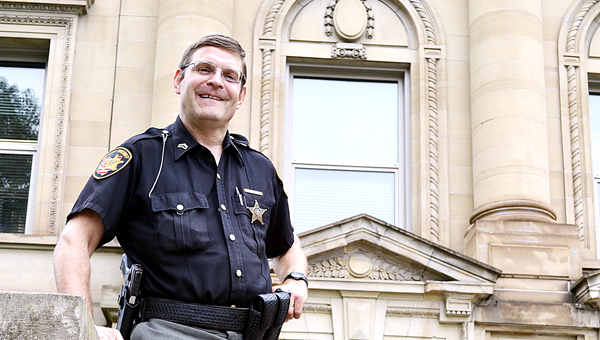 Lawrence County Deputy Dave Wireman, who has spent 25 years as a process server, has retired. Known as “Deputy Dave” by colleagues and members of the community, Wireman is a well-known figure across Lawrence County.

As a teenager, Dave Wireman wasn’t sure what he wanted to do with his life, but his father’s involvement in a race for Lawrence County Sheriff changed all that.

“My dad was helping the challenger in the race,” he said. “The sitting sheriff harassed my dad because of it. We even had to hire a guard to watch our house.”

When the race was over, Wireman said, his dad opened a gun store that was frequented by a lot of deputies.

“I got to know them and would hear their stories,” Wireman said about the deputies. “I thought it would be a good thing to do on the side.”

In 1985, Wireman, a Proctorville native, became a special deputy with the Lawrence County Sheriff’s Office. Three years later a job opened for process server and on April 18, 1988, Wireman, known to most people as “Deputy Dave,” took the job from which he is now retiring 25 years later.

“I was always good at finding people,” he said. “My first year I had a 93 percent serve rate. Other deputies couldn’t believe it.”

Deputy John Tordiff is one of Wireman’s closest friends in the department.

“Everything I can say about him is good, but I don’t want to give him a big head,” he said with a chuckle. “I have known him for years and I don’t remember him ever putting his work off on nobody else. He always did it himself.”

Wireman, 49, has seen a lot in his quarter-decade serving papers. He was also in charge of evictions and house repossessions.

“One time there was a man clinging to the underside of his four-wheel drive truck,” he said. “When I found him I asked him if he lived under there. One man hid in the back of a garbage truck.”

“I would have to kick doors in and sometimes get people out of bed,” he said. “Leaving on their own is a little different than them being told to leave. I never had to arrest anybody, but I love a challenge.”

For a decade, Wireman patrolled the Fairland School district buildings. John Bradley, assistant principal, said during that time Wireman worked two two-hour duties at the schools. He patrolled and kept an eye on things, Bradley said.

“Dave’s a unique guy,” he said. “There was no situation he wouldn’t deal with. He’s a hard worker. If we needed help, he was there and a couple of times I called him to come down he was off duty, but he came anyway.”

Retirement does not mean slowing down to Wireman — who was born with cerebral palsy and has never let that determine how he lives his life — as he plans to continue working.

“I’m still going to work ballgames and collect unreturned equipment for Armstrong Cable,” he said. “I work for several lawyers investigating and serving papers, so I’ll keep doing that, too.”

Dog bites, carbon monoxide poisoning and a couple car accidents did not keep him from doing his job.

Wireman calls Marie, his wife of 23 years, his princess and says he was on the job when they first met. The father of three boys, Wireman turns 50 on Wednesday and has plans after retirement to expand his “Deputy Dave Cave,” a spare bedroom in his house full of books, a desk and pictures of his idol, Chuck Norris.

HAMILTON (AP) — Ohio has added investigators and increased efforts to identify unemployment fraud despite a steady decrease in the... read more