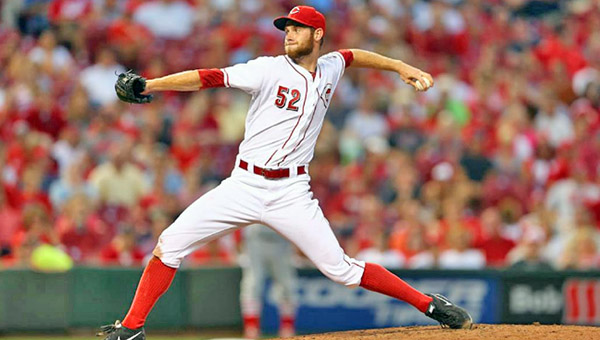 Cincinnati Reds’ rookie pitcher Tony Cingrani went 5.1 innings as he ran his record to 7-3 in the Reds’ 6-2 win over the St. Louis Cardinals Thursday. (Photo Courtesy of the Cincinnati Reds)

CINCINNATI (AP) — A sleepless night gave way to a satisfying finish for the Cincinnati Reds.

Todd Frazier hit two homers, including the first of Cincinnati’s three off Lance Lynn, and the Reds recovered from a 16-inning loss by overpowering the St. Louis Cardinals 6-2 on Thursday night, taking three of four in their final series of the season.

“That’s the biggest part of what we needed to do: We needed to win,” Frazier said.

Jay Bruce and Shin-Soo Choo also hit solo homers off Lynn (13-10), who lasted five innings and gave up three homers for only the second time in his career. Frazier also connected off Seth Maness for the third multihomer game of his career.

By winning their final series together, the Reds tightened the NL Central race and ended the Cardinals’ dominance. St. Louis had won the last seven series between them. Cincinnati’s lone loss was 5-4 in 16 innings on Wednesday night, one that left them with a sick feeling after they blew so many chances.

“That was a big series right there,” manager Dusty Baker said. “That game last night still hurts, but that’s OK. We’ve got a resilient team. I don’t think anybody slept last night.”

That 16-inning loss was set up by the Reds’ third, fourth and fifth hitters going a combined 0 for 19. Frazier, their sixth-place hitter on Thursday, came through with his two solo homers and a single.

“We’ve just got to get somebody hot in the middle of the lineup, and Todd stepped up for us,” Baker said. “He’s been struggling some. He’s a streaky hitter. I’d like to see him streak to the end.”

Left-hander Tony Cingrani (7-3) returned from a sore back and did a little bit of everything. He pitched into the sixth inning, gave up two runs, bunted for a hit, stole a base and scored. The Reds told him not to swing at the plate as a precaution against hurting his back, so he bunted.

David Freese homered for the Cardinals, who have lost six of eight. With first-place Pittsburgh idle, the Cardinals slipped to 1 1/2 games behind the Pirates while the Reds moved to 3 games out.

The Cardinals got some encouraging news before the game. Cleanup hitter Allen Craig has a sprained left foot, but nothing is broken.

Allen twisted the foot while rounding first base on Wednesday night. Initially, the Cardinals feared it was broken — X-rays were inconclusive. He flew to St. Louis for an MRI and more X-rays that ruled out a fracture. He’s expected back at some point during the season.

Cingrani had to leave his start on Aug. 20 because of a strained lower back. He returned on Thursday and showed there was nothing wrong.

Cingrani beat out a bunt for a single in the second inning. He stole second base off catcher Tony Cruz — the first steal by a Reds pitcher since Bronson Arroyo in 2008 — and came around on a wild pitch and Brandon Phillips’ infield single.

“They don’t really pay attention to you over at the bag there,” Cingrani said. “I’m ready to go every time. But they generally don’t want you to steal too often.”

Phillips was taken out hard at second base while completing a double play in the sixth. He left an inning later as a precaution with a sore left thigh.

Lynn had already beaten the Reds three times this season, but is going through a rough time lately. The right-hander has lost his last four starts, giving up 19 runs in 23 innings.

“It’s definitely not fun, especially with the stuff I’ve had lately,” Lynn said. “I think it’s some of the best I’ve had all year. It’s frustrating.”

The only other time in his career that he allowed three homers in a game was June 14, 2012, at Kansas City.

The four homers overall equaled the most given up by the Cardinals this season. Pittsburgh hit four on April 28.

Notes: Cruz was in the lineup after recovering from a stress fracture in his left forearm that landed him on the DL on Aug. 15. … Baker said C Devin Mesoraco has a sore hamstring, limiting his availability. That’s why No. 3 catcher Corky Miller got in before Mesoraco during the 16-inning loss. … Reds SS Zack Cozart extended his hitting streak to 10 games. … The Cardinals headed home for their final series against Pittsburgh. Joe Kelly (7-3) starts on Friday against A.J. Burnett (7-9). The Reds remain home, opening a series against the Dodgers. Mike Leake (11-6) faces LHP Chris Capuano (4-7).

COLUMBUS (AP) — Ohio State linebacker Curtis Grant knows what it’s like to be in the spotlight — and then... read more