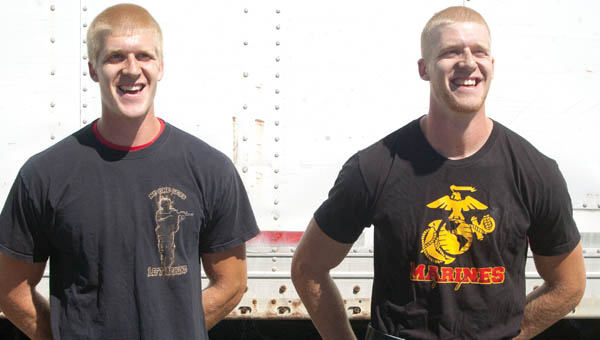 The Lange brothers, Michael, left, and John, right, have both enlisted in the Marines. The brothers are 2012 graduates of Fairland High School.

As you would expect of identical twins, John and Michael Lange do lots of things together.

They both graduated from Fairland High School in 2012. They live together, work together at Lowe’s in South Point, and now they will serve in the United States Armed Forces together.

The brothers joined the Marine Corps through its delayed entry program and are both set to ship out to Parris Island, S.C., to complete 13 weeks of training.

John was the first to join, doing so in April.

“I have wanted to be a Marine since I was in middle school,” John said. “The way they carry themselves, the way they act; I want to be just like that.”

John and Michael have an uncle and a cousin who are Marines, and their father served in the Navy.

Michael enlisted on Aug. 29, almost four months after his brother.

“I have been wanting to do it since I was a kid,” he said. “I broke my leg when I was 15 and had to have some hardware put in it. I had to wait and sign up when my medical waiver got approved, and as soon as it did, I signed up.”

The brothers had initially planned to enlist right after graduating from high school, but their father convinced them to at least try college, something he did not do before enlisting in the Navy, John said.

When training is complete, the brothers will return home for 10 days before attending one of 300 formal military occupational schools of their choosing.

John is scheduled to leave for Parris Island on Nov. 5 of this year and Michael on March 10 of 2014. Both men signed up at the Huntington recruiter’s office.