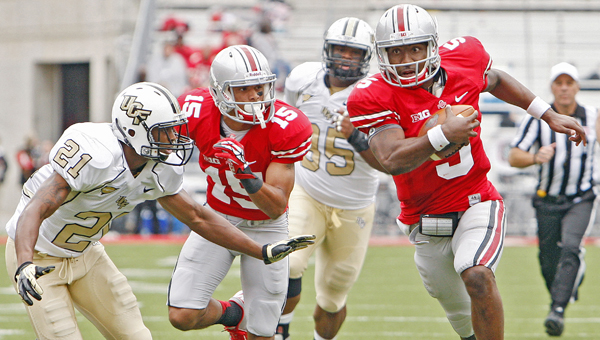 COLUMBUS (AP) — Braxton Miller’s status as No. 4 Ohio State’s starting quarterback for Saturday’s game at California is still up in the air.

“Braxton Miller will be a day-to-day decision,” coach Urban Meyer said on Monday. “I just met with him today. He’s feeling much better. He was a little stiff, which, the first 48 hours after that injury is very tough.”

Miller was hurt on Ohio State’s first offensive possession when he kept the ball on a passing play and was pinned between two defenders, twisted and fell backward to the turf.

He did not return to the game. Kenny Guiton came in to pass for two touchdowns and run for another score in his place.

Meyer, who confirmed that the junior’s injury was a sprained medial-collateral ligament, said he would not err on the side of caution and stick with Guiton to allow Miller extra time to be completely healthy.

“I don’t think so, no,” he said. “If he’s healthy to play and play like Braxton plays, which, you know, he’s not your pocket quarterback and he does a lot of things for us. But if he’s healthy to go, he’ll certainly go. We are not saving him or holding him back.

“This will (take) everything we’ve got to win this game.”

Ohio State is a prohibitive favorite against Cal (1-1), which lost its opener at home to Northwestern and then barely beat Football Championship Subdivision member Portland State last week.

Miller, who was not made available for interviews after the game or on Monday, is a three-year starter who has been considered among the top few Heisman Trophy favorites.

Wide receiver Corey Brown said he would be shocked if Miller doesn’t play on Saturday.

“Braxton’s a tough kid,” he said. “If he can play he’ll definitely be out there playing for the team. He’s kind of taking it day to day but our trainers and coaching staff will do everything they can to have him ready. I know how bad he wants to be out there.”

Co-offensive coordinator and line coach Ed Warinner said there’s not much of a falloff from Miller to Guiton.

“You don’t feel like all of a sudden half of the game plan is eliminated because your second-team quarterback goes in,” Warinner said.

“We feel that (Guiton) is still very capable of executing just about everything out there.”

Meyer said Cardale Jones and freshman J.T. Barrett are the Buckeyes’ other scholarship quarterbacks. Both will make the trip out West just in case.

“Plan C and Plan D are real close to each other right now,” Meyer said of Jones and Barrett. “We practiced them both yesterday.”

CINCINNATI (AP) — The Reds know firsthand what Travis Wood can do when he’s on his game. This time, they... read more