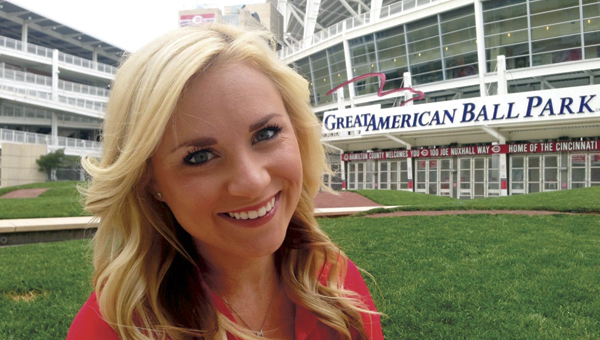 Madison Geswein, an Ironton native and a 2009 St. Joseph High School graduate, is putting her passion for the Cincinnati Reds to work as a member of the Rally Pack. The team of boosters helps keep fans excited and involved at home games.

“I’ve been a Reds fan since I was born. The last time they went to the World Series, I was in the womb.”

This quote, which obviously pinpoints the age of the person giving it (for those who don’t remember, Cincinnati last appeared in the World Series in 1990), is exactly what many baseball fans love to hear from young men; a passionate zeal for the national pastime.

But this Reds lover isn’t of the XY chromosome variety. She may someday give birth to a child of her own.

That’s right. This baseball fanatic is a girl!

Madison Geswein, a 2009 graduate of St. Joseph High School, has been a sports nut her entire life — just like her father, John “Goose” Geswein, and grandfather, Tim Selb. In fact, her most recent sports-related endeavor came to fruition thanks to a casual tip from her dad.

Last January, John mentioned to Madison some openings in the Reds Rally Pack, a highly energetic team of Reds boosters who work to keep the crowds at home games excited and involved.

If you’ve attended a Reds game this year and noticed a familiar-looking blonde cheering on the team dugout or shooting T-shirts into the stands, you’ve witnessed the former Flyer cheerleader in action.

Initially, Madison brushed her father’s suggestion aside. But a short time later, she read the job description online and realized, “This is exactly what I like to do.” So, she decided “why not?” and filled out an application.

In March, following tryouts with approximately 160 others hopeful of filling the three open positions, the recent University of Dayton communications grad was thrilled with a phone call offering her a place on the team.

Did she have pregame jitters? “Oh my,” she laughed. “I can’t tell you how nervous I was.”

“This child was born a cheerleader. She wasn’t fazed a bit.”

Madison smiled. “I guess I hid it well.”

In fact, she was overwhelmed by emotion before she even stepped onto the field. While participating in the Opening Day Parade, Madison said being a part of such a long tradition created a perspective that caused tears to well up in her eyes.

Later, while standing on the field for the National Anthem, her excitement and perspective morphed into divine gratitude.

“At that point I was thinking, ‘Thank you Jesus my father told me about this.’”

While her present position is her most exciting to date, the 22-year-old aspiring sports reporter has other sports-related experiences that will make the average fan drool in envy.

In the summer of 2007, thanks to a recommendation from Bekki Zornes, Madison, who had just completed her sophomore year of high school, landed a job as a staffer for a company owned by Ray Guy, widely regarded as the greatest punter in NFL history. She continued working in this capacity until 2012.

“I’ve met Ray a handful of times,” she said, noting Guy is a very personable man. “That job got my feet wet.”

From there, Madison procured an internship position with the Dayton Dragons (Cincinnati Reds class A minor league affiliate) working in marketing and interacting with fans, a springboard of experience, it seems, for her present position with the Reds.

While attending Dayton, fulfilling the requirements of her degree curriculum, Madison and two classmates created and produced their own campus sports show, UD Overtime, which aired on Saturdays via campus cable.

Despite all of her interesting experiences, Madison also continues to find time to serve as an adviser for the St. Joe Flyers cheerleaders.

To her, Ironton is a very special place.

“The amount of people from Ironton with well-wishes for me has been overwhelming,” she said, noting multiple occasions when local folks have yelled to get her attention during Reds games. “It makes me so proud to represent Ironton and St. Joe in such a good way.”

While her hometown is definitely a source of pride, Madison’s immediate family is her rock.

She, in turn, is theirs.

Her grandmother, Sue Selb, proudly pulls up a link on the Sports Illustrated web site (SI.com). The publication ranked all MLB “cheerleaders” and gave the No. 6 spot to the Reds. Each MLB team was featured with a photo of a member of its rally team. For the Reds, the photo was of Madison.

“She’s good at whatever she does,” said Tim Selb, whose delight in the accomplishments of his granddaughter is obvious. “She puts her heart into everything she sets her mind to. Of course, we’re very proud of her.”

And Madison is just as proud of them.

“I wouldn’t be anywhere without my family.”

Those attending Reds games in September can look for Madison on the 11th, 25th, and 27th. She will also be on the field and working the stands should the Reds make the playoffs — as well as if the team happens to make it to the World Series.

The last time the Reds made it that far, Madison’s family was eagerly awaiting her arrival. How fitting it would be if the team “arrives” again the first year she’s there.

SOUTH POINT — Exploring funding options to supply water to residents of Macedonia Road hill is the next step in... read more