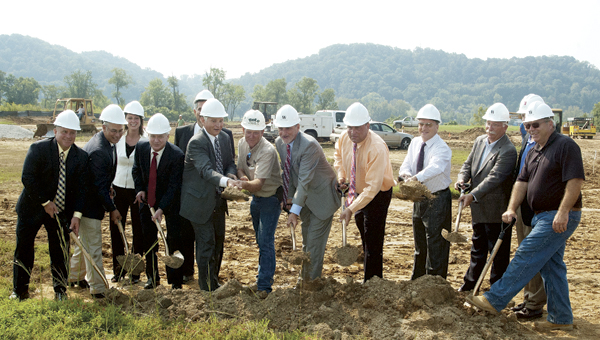 PROCTORVILLE — Roger Vincent, founder and president of Chancellor Senior Management, said he remembers looking at a map that showed Lawrence County as the only county in Ohio without a senior living community.

That’s about to change.

A ceremonial groundbreaking was held Tuesday for the Wyngate at RiversEdge Senior Living Community. The 87-unit, $13.5 million project will be the first of its kind in the Tri-State.

“Besides the 50-plus jobs that are being created,” Bill Pratt, Lawrence County Commissioner, said, “the benefit that we see is helping care for those elderly citizens who need it.”

One thing that makes the project unique is an on-site urgent care facility that will be operated by Cabell Huntington Hospital. The urgent care will be on the property, but will be open to the community as well.

The project is being developed by Chancellor, which specializes in senior living communities. Chancellor has 13 properties in Ohio and West Virginia, including one in Barboursville.

“Working with Cabell Huntington has been a real pleasure,” Vincent, a Proctorville native, said. “If anyone has ever built anything — a house or even an outbuilding — then you know it is not as easy as it looks.”

Of the 87 units, 28 are independent living studio, one-bedroom or one-bedroom deluxe apartments. The other 59 are assisted living for those with dementia or Alzheimer’s disease.

Wallick Construction is building the units on a nearly nine-acre plot of land on County Road 107 across from the Lawrence County Fairgrounds.

The property will create 47 jobs, not including the staff at the urgent care facility, and will add $1 million to the local economy annually, according to Mike DePaola, director of administrative services for Chancellor.

“When people invest in our county, we do not take it lightly,” Les Boggs, Lawrence County commissioner, said. “This for some time has been a premiere piece of property. Several things have been looked at (to build here) but what better thing can we use it for than to take care of the needs of our people and bring jobs to our county.”

“I appreciate the banks’ faith in us because you can have all the ideas in the world, but if you don’t have the financial resources to put it all together it stays an idea,” he said. “It’s a team effort, and we have a great team.”

The facility is expected to open in April 2014. Residents will live on a month-to-month lease basis, according to Vincent, and residents will have the benefit of 24-hour on-site nurses, three meals daily, planned activities, housekeeping and laundry services, all utilities and scheduled transportation.

The urgent care facility will provide primary and urgent care to residents and the community, imaging and lab services, physical therapy and home health care services.