Not much changes for Vikes, Panthers 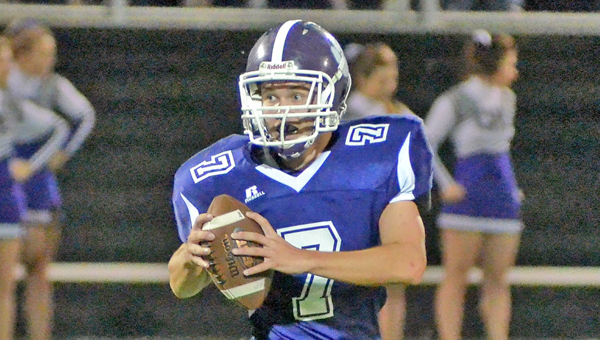 Chesapeake Panthers’ quarterback Austin Stone is one of many first-year starters this season. Inexperience will play a key role as the Panthers play the Symmes Valley Vikings on Friday. (Kent Sanborn Of Southern Ohio Sports Photos.com)

The third game of the season remains the Chesapeake Panthers against the Symmes Valley Vikings.

And a lot of other things remain the same as well.

Symmes Valley coach Rusty Webb agreed that not much changes.

“Neither one of us gets too unorthodox,” said Webb. “This game may not take too long. We both keep it on the ground. It’s all going to boil down to execution and who makes the fewest mistakes.”

There is another similarity this season that is different than most years. Both teams are coming off losses.

Chesapeake (0-2) lost to West Virginia power Wayne last week and the Vikings (1-1) were bitten by the injury bug in a loss at Southeastern.

Clark said catching the Vikings on the rebound is making him anxious.

“They play really hard at their place. They’re coming off loss and they’ll try to find things like we are,” said Clark.

Actually, both teams have been hit by injuries early in the season and are making adjustments. The Panthers will get linemen Quinton Harris and Thomas Riley back this week, but there are other players who were banged up last week.

The Vikings will be missing their top lineman Jacob Easthom who is expected to miss at least two weeks. However, they do get lineman Phillip Combs back.

“We’re both inexperienced at spots. It’s the team who puts together the best game from start to finish who’ll win,” said Clark. “We need to play well for all four quarters.”

Both teams have a lot of inexperience, but Webb said the Panthers have more versatility this season than they had last year.

“They’re faster than they’ve been. (Chad) Meadows is the key to the offense, but they have some other guys who can hurt you if you ignore them,” said Webb.

“They’re good up front and we have to match them. They are fundamentally sound. They should have beaten Oak Hill. They just had some bad luck.”

The Vikings are led offensively by their senior running back, fullback Tyler Rowe.

“We figure we’re going to get a steady diet of Rowe,” said Clark.