Buckeyes want to play keep away 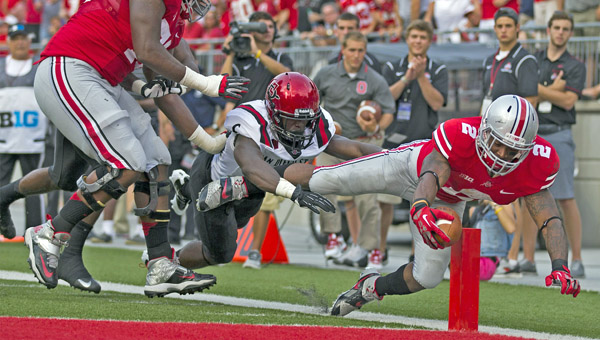 Ohio State Buckeyes running back Jordan Hall (2) drags his foot on the out of bounds line just before crossing the plane during the second quarter against San Diego State at Ohio Stadium last Saturday. Hall will be a key to the Buckeyes’ running game this week against California. (MCT Direct)

COLUMBUS (AP) — Urban Meyer, contrary to popular belief, has nothing against running the ball.

Those who thought he might usher in a state-of-the-art, 40-throws-a-game passing attack along with his spread offense at Ohio State were badly mistaken.

And this week, more than most, he really wants his running game to control the ball and keep it away from pass-happy California.

“That’s basically everything,” he said of the importance of the run game in Saturday’s road contest against the Bears. “To be able to move the chains and get first downs, you’re going to have to block them and run the ball a little bit.”

Meyer wants the Buckeyes to play fast, to pass a lot and to score a lot of points. But the underpinning of all of that is to jam the ball down the other team’s throat, to enforce your will on the opponent up front.

So even though both Ohio State and California both run what is loosely called a spread attack, there are very few similarities.

Yet even coach Sonny Dykes knows that his team has to do more than just chuck the ball repeatedly. The Bears will also have to move the ball on the ground.

“We have to be able to run the ball,” said Dykes, whose team has run the ball about 35 percent of the time in its first two games. “This is not a team (Ohio State) you can drop back 70 times and throw the football against. That won’t be in our favor if that’s what happens on Saturday.

“We have to establish our run game.”

The Buckeyes want to reel off plays quickly to keep defenses in motion, but will never be in the same ballpark with teams like Cal, which has had freshman quarterback Jared Goff throw 125 passes in his first two games.

Even though Meyer is committed to the run, that doesn’t mean the Buckeyes are exactly copying Woody Hayes’ between-the-tackles attack.

Mixing dashes by quarterbacks Braxton Miller and Kenny Guiton with productive carries by tailback Jordan Hall, they stand 27th in the nation in rushing at 262 yards a game.

It remains to be seen if Miller — who sustained a sprained ligament in his left knee last week against San Diego State — will play very much or at all against Cal. Meyer said on Thursday that no decision will be reached on Miller’s availability until game time.

Guiton stepped in for Miller last week and had the finest game of his career, throwing for two scores and running for another.

Running the ball effectively is the best thing you can do to rest your defense against the “Bear Raid” attack that is averaging an astonishing 97 plays, 30 first downs and 473 yards passing per game.

“To be honest, when you’re a good defense, you’re not allowing people to do 100 plays,” Ohio State linebacker Ryan Shazier said. “That’s our goal. If we can control the tempo of the game, then I feel like we can win it.”

The Buckeyes’ defense knows it needs a helping hand from the offense if it is to control the pace of play.

“I feel like our offense will do a good job of keeping us off the field as much as they can,” safety Christian Bryant said.

Meyer is plotting ways to slow down the Bears’ offense by playing keep-away with the ball or forcing the freshman quarterback to make decisions under pressure.

The goal is to not let your defense get worn down while maybe wearing down the Bears’ defense.

“Well, we want to possess the ball,” Meyer said. “The first thing we want to do is score. We have to score some points because these guys (the Bears) are going to.”