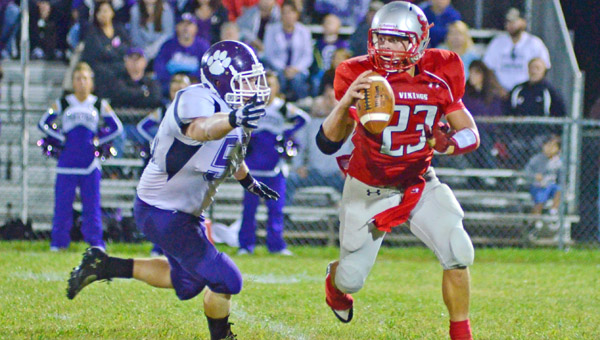 Symmes Valley Vikings’ quarterback Tanner Mays looks for an open receiver as he scrambles to get away from the defensive pass rush during an earlier game against Chesapeake. The Vikings play at unbeaten Racine Southern on Friday. (Courtesy Robert Stevens of The Gold Studio in Ironton)

WILLOW WOOD — There are certain games that are a test on a team’s schedule. As the Symmes Valley Vikings get ready for week five, call this a midterm.

The Vikings face a major test Friday as they visit the unbeaten Southern Tornadoes.

Southern has never won more than two games without a loss to begin a season. Vikings’ coach Rusty Webb said there is a reason the Tornadoes are 4-0.

The Tornadoes are coming off a 48-12 win over Federal Hocking as they racked up 501 total yards.

“You can’t load up on the run because they have the ability to throw the ball. The quarterback throws the ball well and he scrambles well,” said Webb.

“They have size. They’re pretty good up front. Pickens is a very athletic lineman,” said Webb.

Although it is a non-league contest, the game will be worth a lot of computer points to the winner.