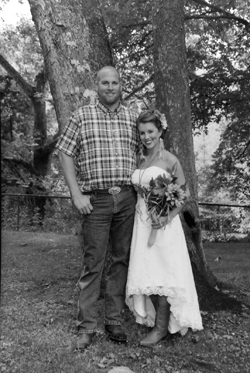 Tonya Leigh Dalton and David Jordan Wilson were united in marriage on the afternoon of Saturday, June 29, 2013, at Lake Vesuvius. The ceremony was performed by Chris Johnson.

The best man was Heath Fliehman, friend of the groom. Groomsmen were Brandon Carpenter and John Scott, friends of the groom.

Gianna Pemberton, niece of the groom, and Wade Carper, cousin of the bride, served as the flower girl and ring bearer.

A reception immediately followed the wedding. Photography was done by Brenda Jenkins. After a honeymoon in Gatlinburg, Tenn., the couple is residing in Kitts Hill.