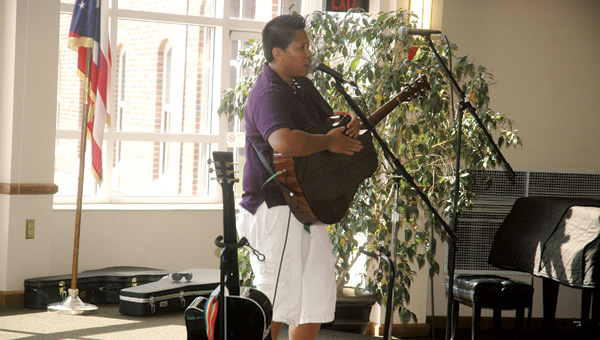 Cat Cirner, a former Ohio University Southern student, performs to a packed Mains Rotunda on Wednesday as part of the school’s Brown Bag Concert Series. Cirner calls herself a balladeer and performed some of her own songs as well as tunes by the Indigo Girls, Sheryl Crow and Bob Dylan.

When Cat Cirner quit playing piano, she picked up a guitar and has seldom put it down since.

“I started playing piano when I was 5 years old,” Cirner, 32, said. “I told my mom I didn’t want to play piano anymore when I was 15. She told me I didn’t have to play piano, but I had to play something.”

Cirner says her brother is a “phenomenal” guitarist and she would listen to him play. She then taught herself to play guitar.

A former Ohio University Southern student, Cirner returned to campus as a performer in the Brown Bag Concert Series held from noon to 1 p.m. in the Riffe Center Mains Rotunda.

A native of Ann Arbor, Mich., Cirner now lives in Catlettsburg and works in health care but credits music, and her love of it, for being a guiding light in her life.

“Music has allowed me to open my eyes and see the world in a whole different light,” she said. “Just like a lot of people, I discovered my love of music in church.”

Cirner has no plans or ambition to pursue music as a profession, but doesn’t plan to stop performing anytime soon.

“Would I love to get paid doing what I love? Yes,” she said. “But as I have gotten older and past my prime, I just want to focus on my kids. With the advances made in technology and with YouTube and things like that, it’s easy to get music and make music these days.”

Cirner is a self-professed balladeer who performed songs by the Indigo Girls, Sheryl Crow, Bob Dylan as well as some original songs.

Cirner will give another performance from 7 to 9 p.m. Saturday, Oct. 5, at Chimney Corner in Ashland. Local musician Sasha Colette will be performing with Cirner periodically throughout show.

In recognition of October being Breast Cancer Awareness Month, OUS students and faculty were also seeing pink around campus on Wednesday.

Michelle Dotts, a history major at OUS and assistant to the director, was busy coordinating breast cancer awareness projects.

“We have information tables all over campus and our nursing students are doing health screenings,” Dotts said. “We are also giving away door prizes and all faculty and students were urged to wear pink.”

The Brown Bag concerts continue for two more weeks when the Ironton High School Varsity Singers perform from noon to 1 p.m. on Wednesday and the series will culminate on Oct. 16 with open mic performances.

The mother of a 2-year-old girl was sentenced to the STAR Community Justice Center on a charge of child endangerment... read more