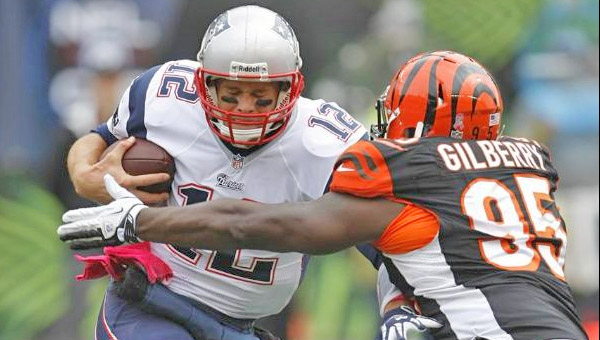 CINCINNATI (AP) — Tom Brady couldn’t get into the end zone against a defense that’s developing a reputation for taking down the league’s top quarterbacks.

Aaron Rodgers found out. And so did Brady, running on empty all game long.

The Bengals ended Brady’s streak of 52 consecutive games with a touchdown pass on Sunday, sacking him on his first pass attempt and keeping the pressure going.

The defense even helped BenJarvus Green-Ellis get into the end zone for the game’s only touchdown in a 13-6 victory over the previously undefeated Patriots.

It was so impressive that defensive coordinator Mike Zimmer was handed a rain-drenched game ball in the locker room.

“That’s a great accomplishment,” coach Marvin Lewis said. “I don’t normally give out game balls, but I gave that one to Zimmer. They played well today. They were tight in coverage most of the day. Upfront, they got after it.”

Geno Atkins sacked Brady on his first pass attempt, and the Bengals (3-2) dropped him four times overall. And that wasn’t all: New England (4-1) failed to get into the end zone after a first-and-goal from the 1-yard line in the fourth quarter.

One yard too much for New England? Stunning.

“I’m bummed that we lost,” Brady said of his broken streak. “I think that’s all that really matters.”

A driving rain moved in just before New England’s final chance. After a couple of dropped passes, Brady threw one toward the goal line and Adam “Pacman” Jones made a juggling interception inside the Cincinnati 5-yard line.

“We knew we were going to have our hands full, but we were able to get to Brady on the second play,” defensive tackle Domata Peko said. “After that, you could see he was a little shaky. If you hit somebody enough, they’re going to make mistakes.”

Brady had thrown a touchdown pass in 52 straight games, the second-longest streak in NFL history behind Drew Brees’ 54-game streak.

They are now, with good reason.

Brady never got into a rhythm against Cincinnati’s unrelenting pass rush. He finished 18 of 38 for 197 yards with one interception and a paltry passer rating of 52.2.

Cincinnati’s defense even had a hand — well, a shoulder — in the winning touchdown.

The Bengals had failed to score a touchdown during a 17-6 loss at Cleveland, one that left them looking to establish an identity on offense by running the ball. They did what they wanted in one grinding drive.

Cincinnati went 93 yards in 14 plays for its touchdown, holding the ball for 7 minutes, 48 seconds. Peko came in as a blocking fullback on third-and-goal from inside the 1-yard line but took off too soon, a false start.

Andy Dalton scrambled to the 1 on a keeper, and Peko came in and plowed the way for Green-Ellis to score on fourth down.

Dalton was 20 of 27 for 212 yards with four sacks and one costly interception. He scrambled away from pressure and threw back across the field in the first quarter, getting intercepted by Brandon Spikes at the 8-yard line.

It was the first time during his three-year career that Dalton threw an interception on a play that started inside the opponent’s 20-yard line.

Given how the defense was playing, the one touchdown drive was good enough.

“It’s definitely fun to watch those guys go out and play,” Dalton said. “They’re doing so many good things, and to see what they do to a guy like Tom Brady and what they’ve done to a lot of these quarterbacks — they’re some of the best in the league.

Notes: Patriots TE Rob Gronkowski was inactive for the fifth time. He’s recovering from a forearm injury and back surgery. … Brady had been 4-0 against the Bengals with a 114 passer rating. … WR Austin Collie, signed on Thursday, also was inactive. … DL Tommy Kelly hurt his right knee in the fourth quarter but walked off the field. … New England has a takeaway in 32 straight games, the longest active streak in the league. … Bengals CB Leon Hall missed a second straight game with a hamstring injury.