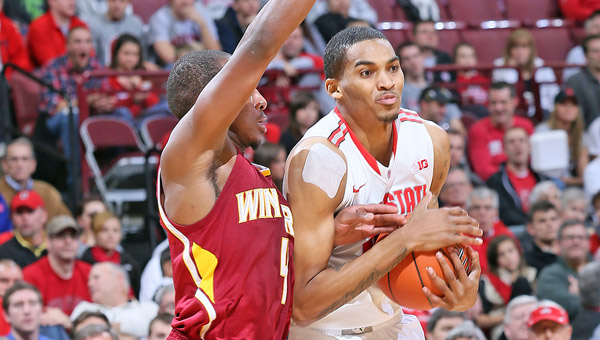 Ohio State forward LaQuinton Ross (10) is one of four returning starters for the Buckeyes this season. (MCT Direct)

COLUMBUS (AP) — Almost everybody is wondering where the points will come from for the Ohio State Buckeyes.

LaQuinton Ross — expected to fill the only opening in the returning starting lineup — isn’t wondering. He knows.

“I definitely think I’ve been waiting,” said the junior, who will take the spot vacated by Big Ten scoring leader Deshaun Thomas. “The fans have also been waiting, too, to see what I can do. They heard the buzz about me since I came out of high school. At the end of the year I gave them something to look forward to this year.”

As the Buckeyes begin practice, a lot is riding on Ross, an acclaimed prep player who saw very little action as a freshman two years ago and then blossomed late last season in the biggest games.

The silky 6-foot-8 wing can shoot the 3, score on an isolation play or can muscle in a shot in the paint. He averaged 8.3 points a game a year ago then had a terrific NCAA tournament. He averaged 12 points in the first two rounds, then had 17 in the regional semifinals including 10 in a row in the second half before the Buckeyes were upset by Wichita State.

“The types of things he did at the end of last year are things he’s going to come out of the gate with,” guard Lenzelle Smith said. “Guys are kind of interested and excited to see what he’s going to bring to the table.”

When the opposition went on a run during last year’s 29-8 campaign that included a Big Ten tournament title, it was the 6-foot-7 Thomas who always seemed to bail out the Buckeyes.

But Thomas gave up his final season of eligibility to jump into the NBA draft and was taken by San Antonio.

The Buckeyes will certainly miss the 19.8 points per game he provided. But they will also miss his willingness to take over when a big bucket was needed most.

Coach Thad Matta, 250-73 heading into his 10th season, believes that it won’t have to just be one player who picks up the slack.

“Collectively, guys have got to score more,” Matta said on Thursday at the team’s annual media day. “The one thing you saw more last year was guys had games where they showed that they could put the ball in the basket. Sam (Thompson) at Penn State, Lenzelle’s done it, Aaron (Craft) has done it, LaQuinton’s done it, Shannon (Scott) has done it. We have to have a little bit more of a flow to our offense. It’s something that we tried to put a big premium on.”

Ross, who has never started a college game, has many of the same attributes as Thomas — a picture-perfect form, a short memory of shots that don’t go in and the ability to score in all phases of the offense.

But he also knows he’s not alone.

“We’ve got almost the whole team coming back,” he said. “Everybody is going to contribute this year. But I take it upon myself to try to (make up for) some of the scoring that we’re losing.”

The defense is among the best in the land, led by the guy opposing fans love to hate. Craft, who with Smith are the only seniors on the team, makes life miserable for the other team’s guards. Physical, tough and with quick hands, he initiates a lot of the Buckeyes’ offense at the other end.

He completely changed his shot in the offseason.

“We started from square one this spring,” said Craft, the leading returning scorer at 10 points a game. “It was tough, it was frustrating; at times you just kind of want to throw it in. I’ve put in the time. Now we’re just trying to go out there, have some fun and enjoy it.”

Sam Thompson, a prodigious leaper, takes up one spot on the wing, with Amir Williams again back in the post.

The bench provides specialists who Matta can mix and match as needed. Shannon Scott is a lightning-quick point guard who can shut down a hot hand and trigger the fastbreak. Amedeo Della Valle, the native of Alba, Italy, is a 3-point specialist who is adored by Ohio State’s student section. Trey McDonald will spell Williams underneath.

Freshmen Marc Loving and Kameron Williams also should figure into the mix.

There might not be a superstar, but it’ll be a competitive team, hard to guard and hard to play against.

“I love how competitive this team is,” Craft said. “We have seven upperclassmen, which is different. Coach Matta usually doesn’t have that. So we didn’t have to walk through as much.

“We kind of went right into things.”

Rusty Miller can be reached at http://twitter.com/RustyMillerAP