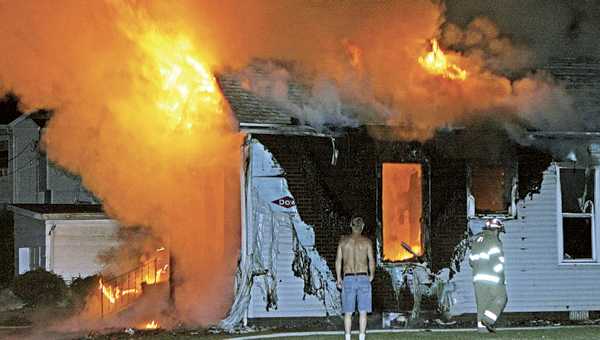 Firefighters respond to a blaze in the 500 block of Heplar Street in Ironton early this morning. The fire was fully involved and a woman was taken by EMS to a local hospital to be treated for minor burns and smoke inhalation.

A house was destroyed and one woman taken to the hospital after a fire broke out early this morning.

At 2:03 a.m. all three crews from the Ironton Fire Department along with the Ironton Police and Lawrence County EMS were called to 515 Heplar St.

IFD Captain Steve Lewis said the residents of the property were home, and a woman was taken by EMS to a local hospital and is being treated for minor burns and smoke inhalation.

The house was a total loss.

The fire is under investigation by the state fire marshal’s office.

Ironton Police Chief Dan Johnson said his department would assist in the investigation if requested by the fire marshal.

Community service workers collect old furniture and discarded items from Ironton’s alleys this week during a cleanup sponsored by the... read more