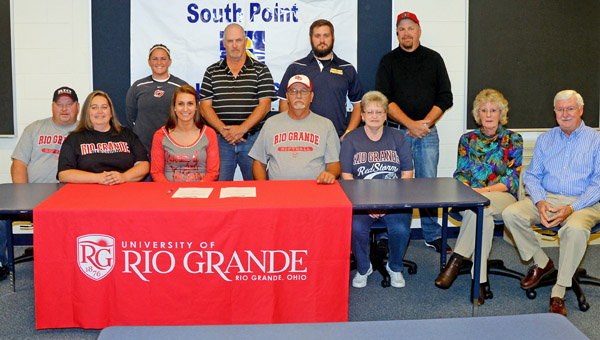 Bradshaw made Brown part of the program when she signed her to a letter-of-intent Friday.

“I saw her play a lot this summer. I saw a lot of athleticism and the ability to play any position as well as pitch which is always an advantage,” said Bradshaw.

“We actually played her summer team K.C. Diamond a few weeks ago. She threw first few innings against our Rio team and did really well. So I’m anxious to get her in there and start working with our pitching coach. I think she’ll fit in real well.”

Brown had just started to get interest from colleges when Rio Grande stepped up and quickly grabbed her interest.

“I had some schools that contact me, but they just wanted me to come and visit,” said Brown. “I’ve been to Rio’s camps. It felt more like home, it felt real comfortable, it was easy going and easier to be out there.”

Signing to play with the RedStorm not only filled Bradshaw’s needs, but it also fulfilled one of Brown’s goals.

“I feel pretty excited. It has always been a dream to play at the college level,” said Brown.

“Ever since I was seven years old, I’ve wanted to play softball. I played volleyball but as I got older softball got more time consuming, so I had to give up one and I continued softball.”

Brown will still have her senior season to develop and get better prepared for the next level.

“I feel pretty good about (playing college softball). It’ll be a good experience. They have some good pitchers there now, but I feel if I work hard, I feel I can make it,” Brown said.

Brown plans to pursue a career as an utlra-sound technician.