‘The King’ for a day 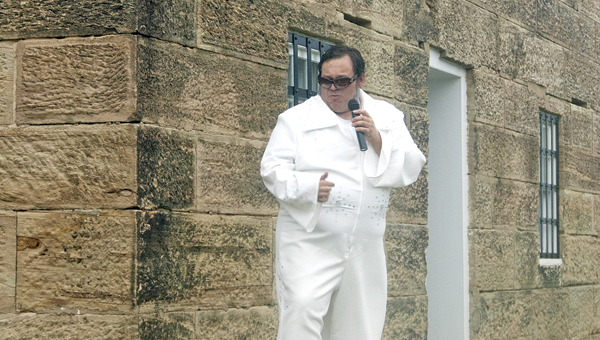 If it were the 1950s and on the Ed Sullivan Show, South Point High School English teacher Ben Music could have only been shown from the waist up.

The Historic Jail Preservation Corporation’s “Old Jail” fundraiser had a “Jailhouse Rock” theme and asked for employees of Lawrence County Schools to channel their inner Elvis Presley for an impersonation contest.

“This is actually my first attempt at doing this,” he said. “I am a huge Elvis fan and I always have been. I think this is great.”

Music may have the lone impersonator at the event, but judging by the crowd’s reaction, he was the only one needed.

After Music’s three-song set concluded with a rendition of Presley’s hit “Suspicious Minds,” he handed out leis to people in the audience and spent several minutes posing for pictures with his new group of fans.

Music said he decided to participate in the contest at the urging of South Point High School Principal Jayshree Shah.

Music went all out for his inaugural appearance as Presley donning large sunglasses and a rhinestone encrusted one-piece suit that complemented his existing Presley-like sideburns.

“A student of mine made me this suit,” Music said. “This is the first time I’ve worn it, but I have a feeling it won’t be the last.”

Event co-organizer Edna McClain said she is hopeful this is the last fundraiser the jail corporation has to have, adding last year’s event raised enough money to renovate the second floor but more work is needed.

Members of the corporation anticipate the building becoming a museum, a community center or another type of educational tool.

Music won $100 for his performance.

Four council seats up for grabs   It will be a case of odd man — or woman — out... read more