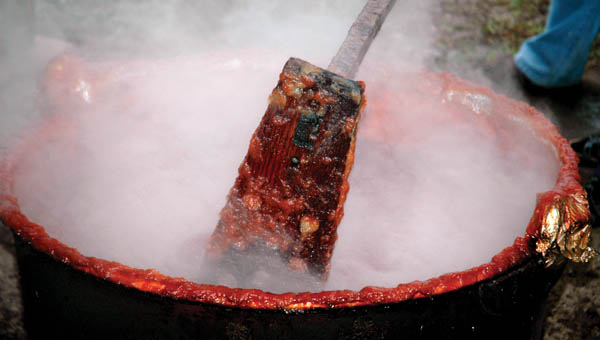 The apple butter made at the Lawrence Furnace Church must be churned for hours a day. The Church has been making the preservative for 70 years.

For 70 years a fundraiser for the Lawrence Furnace Church has became a cornerstone of the community and a tradition passed down through generations.

Every year the congregation of the church, along with residents of the community, come together to make and sell apple butter. The proceeds go to the maintenance of the church as well as other charitable projects in which the church is involved.

“This is our main fundraiser of the year,” said Nancy Steed a member of the Lawrence Furnace Church. “From the money we make here we can keep up our church, as well as do things like donate to the city mission, feed families in need or just anything else that arises.”

Making the apple butter is a long and meticulous process that requires 240 gallons of applesauce, 200 pounds of sugar, and two boxes of pure cinnamon. The church also makes a diet variety of apple butter out of a sugar substitute for people who are watching their calories.

“We make three different kinds of apple butter,” Steed said. “Regular, cinnamon and diet for people who can’t have sugar or are just watching their figures.”

Thelma Shope has been making apple butter for the Lawrence Furnace Church for 57 years and says it’s a tradition that she hopes continues well into the future.

“Three generations of my family have been making apple butter at the church,” Shope said. “I really pray this is something that always goes on at our church. We’ve been at it 70 years making it to 100 shouldn’t be a problem.”

To ensure that the apple butter tradition carries on members like Steed and Shope have been teaching the techniques of producing the condiment to the youth group.

“Nancy and I have been showing our youth group how to make it,” said Shope. “A lot more goes into it than I think they realized, but they are getting the hang of it so they can take over in the future.”

The cooking of the apple butter begins at 4 a.m. and can lasts up to 16 hours depending on the amount of butter that must be prepared, creating a need for multiple work groups.

“We take shifts,” Steed said. “But someone is always out there during the cooking process either turning the butter or doing whatever needs to be done. It takes a while. You have to make sure you boil all of the water out of the butter so it needs constant attention.”

On top of boiling the water out of the apple butter Shope says it has to be prepared in a very specific fashion to get the best possible taste.

“I can’t tell you all our secrets,” she said. “I can tell you that it has to be cooked over a wood fire. Cooking it any other way just isn’t as good.”

The church takes hundreds of orders throughout the month of October for the preserve, which has earned quite the reputation not just in the area but internationally as well.

“We ship out orders all over Ohio” Steed said. “We’ve also sent out orders to Indiana, Tennessee, even sent a few all the way down to Australia. Not sure how they found out about us over there but we’ll send it anywhere.”

Shope says that when she started taking part in the fundraiser that it was a much smaller operation, and would not have been able to grow without all the help from so many volunteers.

“It takes a lot of people,” she said. “We get so much help from people in the community and from Judge (O. Clark) Collins’ crew. I just want to give a special thank you to everyone for making this the event what it is.”

The making and selling of the apple butter at the Lawrence Furnace Church will continue until Saturday. The group will end this year’s fundraiser by finishing up the last batches of apple butter as well as hosting a craft show and turkey dinner.

How much to spend?

Budget commission debates certification   Determining how much to hold back for a rainy day remains the question for the... read more