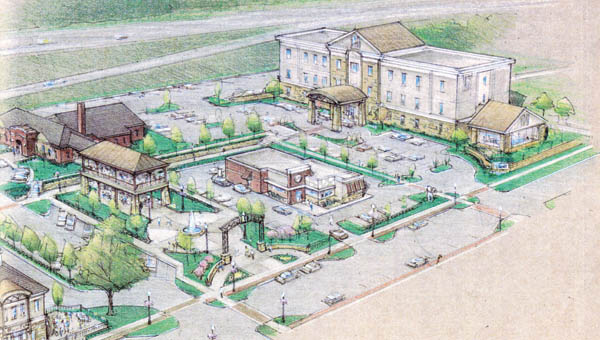 Ironton’s long-awaited hotel could be up and running by summer.

At a construction meeting on Wednesday, a timetable was outlined to turn approximately four acres near downtown Ironton into the first phase of the Ninth Street Gateway Development Project.

Bulldozers were expected at the site today to begin preliminary work needed before construction of a Holiday Inn Express and Suites and a Frisch’s Big Boy can begin.

“The hotel could be open in nine months,” Ralph Kline of the Ironton-Lawrence County Community Action Organization, said. “The Frisch’s in the spring.”

On Tuesday, 1.96 acres at the site on Ninth Street from Vernon to Adams streets were transferred from Lawrence County Port Authority to Ironton, OH 0313 LLC for $400,000 for construction of the hotel. Also on Tuesday the port authority sold .9 acres of the property to The Ironton Partners LLC for $200,000 to build the Big Boy restaurant.

The port authority will retain ownership of the remaining acreage for common areas.

“I feel as good as you can feel. I just signed the contract,” Ironton Mayor Rich Blankenship said. “This has been another project that has been in the works for many, many years. A lot of people deserve credit for this. When a lot of people get together and commit to a project it can be done. This is one of the things the citizens of Ironton have wanted for a long time. With all the partnerships I am very confident that construction will begin in a few days.”

John Mullins Construction of Wheelersburg is handling the preliminary site work and construction of the Frisch’s. MPH Hotels of St. Petersburg, Fla., will be in charge of the hotel construction. MPH, the Ironton Commercial Properties and the Lawrence Economic Development Corporation are the three managing investors in the hotel.

Creating the Ninth Street project started back in 2009 when the Old Engineer Property LLC, made up of the then Ironton Port Authority, county port authority, the CAO and the LEDC, began acquiring properties at the site. In 2011, demolition of structures there began including the former Dennis J. Boll Group and Shelter Home and the former county engineer’s garage.

“This is another project that is moving Ironton in the right direction,” Blankenship said. “When I came into office nearly six years ago there were two projects the citizens of Ironton wanted — one, the new bridge, and then the hotel. Six years later here we are. Persistence pays off.”

With just over 10 percent of the almost quarter of a million dollars available already spent, Lawrence County continues to... read more