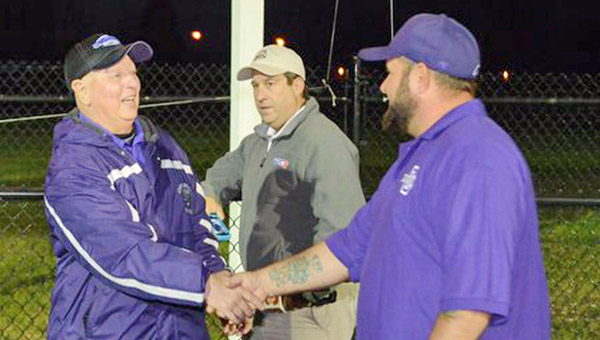 CHESAPEAKE — Fans who sit and watch football games in Panthers Stadium are watching the action on a field turf surface installed this season.

However, in the future they will also be watching the game on a field with a new name.

Chesapeake named the new playing surface Phil Davis Field in honor of their former head coach and his accomplishments.

Davis spent 34 years as a head coach including 22 seasons at Chesapeake. He took over a program that was 3-27 over a three-year period and 0-10 the year prior to his arrival.

During his tenure, Davis was 126-103 with eight of the program’s 11 Ohio Valley Conference championships and seven of the school’s eight playoff appearance.

Davis was 207-139 overall in his career and named to the Ohio High School Football Coaches Association Hall of Fame in 2011.

“It’s one of those things you don’t think about. I was a little bit overwhelmed, to tell the truth,” said coach Davis. “You think about all the kids who played for you and all the assistant coaches you have had, and they’re responsible for that, too. It felt a little strange.”

Former Chesapeake assistant coach Andy Clark followed Davis as the head coach in 2011 and guided the Panthers to their other playoff appearance. Clark also played for Davis from 1996-99 and he said Davis is definitely deserving of the honor.

“As a coach, he did a lot. He made people in Chesapeake care about football. Having played for him and coached under him, he’s a guy who knows a lot about football,” said Clark.

“He knew how to get the most out of his players whether they were a talented team or not. As good of a coach he was, he was an even better person. He knows how to treat people and he treated you fair. He still does.”

Prior to Friday’s game against Fairland, David addressed the crowd and offered encouragement to the team.

Clark said Davis has always exhibited great wisdom in all situations, whether good or bad.

“The way he handled himself in sports and as a teacher is a big reason why I do what I do. He always found something positive through whatever adversity he encountered. That was infectious. It rubbed off on his assistants,” said Clark.

“He approached every practice and every game the same. There aren’t too many situations he hasn’t seen. He knows how to handle any situation.”

Davis and his wife, Helen, were joined by their children, twin sons Brian and Scott and daughter Gina (Hunter) Duran, for the ceremony. Davis also noted the other people on hand for the evening’s events.

Jim Walker jim.walker@irontontribune.com   SOUTH POINT — The South Point Pointers revved up their engine and then put it on... read more