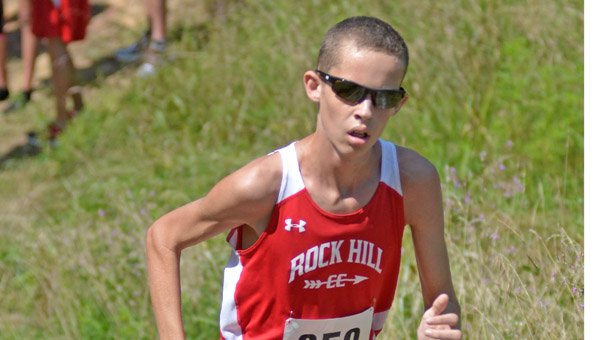 PEDRO — Seth Miller might be vision impaired, but he has always been able to see his goals.

The Rock Hill Redmen sophomore cross country runner is blind in his right eye and has no depth perception. But that hasn’t stopped him in his quest to achieve his goals.

“During cross country races that start later in the evening, I can’t see at night. I have no depth perception. If there’s a root sticking up, I can’t tell,” said Miller.

“Track doesn’t effect me too bad. It bothers me a little at night, but usually the track is lit up pretty well.”

The Ohio Valley Conference meet started later this season and began to get dark midway through the race. Miller still managed to finish second overall.

“He’s had a great season. He works hard. He’s one of the hardest working kids I know. He’s not one of those kids you have to push. He pushes himself. He has his goals he wants to accomplish and he worked really at it,” said McFann.

When Miller broke the school record at the Piketon Invitational on Sept. 28, McFann knew the runner was a strong candidate to reach the state meet.

“(Breaking the record) was something else we were going for. I’m glad he got it. I don’t know who was more excited that day, him or me.”

Miller said he usually approaches each race the same, but he did go to the regional course the day before to run it and check for any soft spots or obstacles in his path that might cause him to trip.

It all seemed to check out, but Miller admitted he never expected to deal with the events that arose during the race.

One-quarter of a mile into the 3.1-mile race, Miller was caught in a pack of runners and fell. He got up and managed to get back among the leaders, but when he tried to pass one competitor, the runner accidently stepped on the heel of his shoe.

Miler ran a short distance with the shoe still on his foot, but he soon lost it and ran the rest the mile and a half with just one shoe. He finished with a 17:05.44 time.

“With one shoe on, it was still a pretty good time. I can’t complain. I still qualified. It was a bad time. I’ve run better times,” said Miller.

“A quarter of a mile in, I fell and I thought it’s going to be an interesting race. I didn’t see all that coming.”

But with the state meet ahead, Seth Miller can see clearly now and it’s looking pretty good.