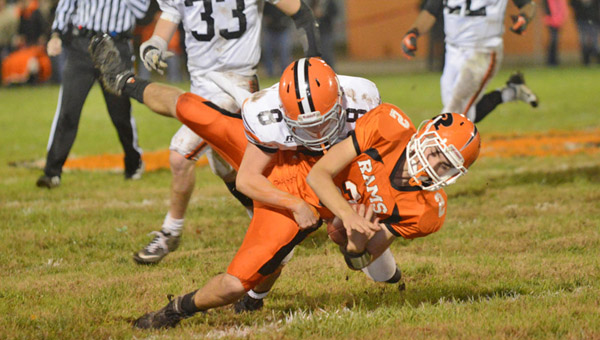 RACELAND, Ky. — The Ironton Fighting Tigers couldn’t get it started, and that meant they had reached the end.

Ironton couldn’t get its offense untracked and thus the Fighting Tigers lost 17-0 to the Raceland Rams Friday in the regular season finale.

The loss also brought an end to the Fighting Tigers’ playoff hopes as finished 3-7 and will be 10th in Region 17 of Division V.

“We didn’t control the line of scrimmage on offense and that’s where it starts,” said Ironton coach Mark Vass. “(Raceland) has got size and they’re pretty good up front. They gave us fits up there so we had trouble running the ball.”

“They played good defense and we didn’t execute that well on offense. But it all started on the line of scrimmage,” said Vass.

One key area was penalties. Ironton was whistled 11 times for 95 yards in penalties, several coming on third or fourth down stops that kept Raceland drives alive. Consequently, the Rams never punted.

The Rams had six penalties for 45 yards, but three of the penalties were for kicking the ball out of bounds and being forced to kick-off again.

Leading rusher Daylin Beach was held to must 32 yards on 17 carries. However, the Rams’ inside counter was effective as Kane Snyder ran 13 times for 86 yards and a touchdown and Carson Christian had 68 yards on 12 attempts.

“I was happy with the defense. That’s a good offense. It puts a lot of points on the board. To hold them to 17 (points) is a pretty good showing, but if you don’t score you’re not going to win too many,” said Vass.

The Connor Messer to Rodney Vance flea-flicker on the game’s first play got the ball to the Ironton 24.

Ironton came back and drove to the Rams’ 48 but a fourth down play was stopped for no gain.

In the second quarter, the Rams had an incomplete pass on a second-and-11, but a penalty on Ironton gave the Rams a first down to midfield. Snyder had runs of 21 and 29 yards, the second for a touchdown with 8:31 left in the half and it was 10-0.

A shanked punt gave Raceland the ball at the Ironton 34 to begin the second half. Four plays later, the 6-foot-3 Messer was able to win a jump ball against 5-8 Ironton defensive back Tanner Price to make a 24-yard touchdown grab and it was 17-0.

Ironton drove to the Rams 7-yard line, but a fourth down and goal pass was intercepted in the end zone by Maverick Dixon.

Raceland moved to the Ironton 8-yard line but the Fighting Tigers had their own goal line stand.

Neither team threatened the rest of the game.

“That’s a good ball club and we knew it. We had to play a pretty good game. You just got to control the line of scrimmage and that sums up both sides of the ball pretty much,” said Vass.

“The effort was there all year. I’m proud of this bunch. We fought through a lot of adversity. But we had trouble running the ball. They were keying Palladino pretty good. We just tried to mix it up. We ran about everything.”

Jim Walker jim.walker@irontontribune.com   PROCTORVILLE —Not much changed for the Fairland Dragons on Friday. The Dragons’ offense rolled up the... read more