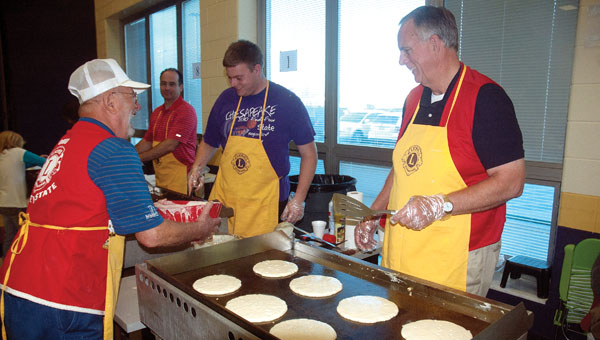 Rick Slack and his son, Cory Slack, keep an eye on the bubbling batter while Eugene Williams watches.

CHESAPEAKE — By 9:30 Saturday morning Lions Club president Paul Hart was pleased with what he was seeing.

“I wanted a record crowd and I got a record crowd,” Hart said as he watched people lining up for pancakes and sausage for the annual Rome, Proctorville, Chesapeake Lions Club pancake breakfast.

As always the event was held the Saturday before Election Day at the Chesapeake Elementary School.

“We have also had record advertising on our place mats,” Hart said.

All proceeds from the breakfast go to the club’s main mission of providing eye exams and glasses to those who cannot afford them.

“It is so nice to be able to meet and greet all these people,” Kay Ransbottom of TLC said.

“We drafted him,” Rick Slack said.

Diners were lined up as doors opened at 7 a.m., then by 8:30 a.m. the crowd thinned out. However within an hour the cafeteria was packed again.

“All of a sudden this broke loose,” Hart said.

As the club’s new president Hart says he wants to rejuvenate the organization.

“The Lions Club was dying off,” he said. “There was not good attendance. Only five to eight people showed up. My goal is to restore the club’s growth and recognition.”

The condition of an 18-year-old Coal Grove man shot by a homeowner as he was allegedly attempting a robbery has... read more