Reds make offer to Choo; pass on Arroyo, others 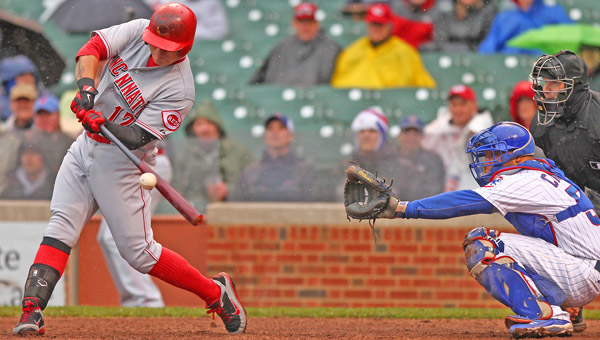 The Cincinnati Reds made a qualifying contract offer of $14.1 million to free agent centerfielder Shin-Soo Choo on Monday. Choo was a key player as the Reds’ leadoff hitter. (MCT Direct Photos)

CINCINNATI (AP) — The Reds made a $14.1 million qualifying offer to leadoff hitter Shin-Soo Choo on Monday, but decided against the same approach for right-hander Bronson Arroyo and four others.

They chose not to make qualifying offers to infielder Cesar Izturis, right-handed reliever Nick Masset and left-handed relievers Manny Parra and Zach Duke. All could re-sign with the Reds as free agents.

If Choo accepts the offer, he stays for another season at $14.1 million. If he declines and signs with another team, the Reds will get compensation in next June’s amateur draft. He has until next Monday to make up his mind. He’s expected to seek a multiyear deal.

Arroyo joined the Reds in 2006 and has a streak of nine straight seasons with at least 30 starts, making him a dependable part of any rotation.

Izturis was a reserve infielder who batted .209 in 63 games with no homers and 11 RBIs.

Parra was 2-3 with a 3.33 ERA in 57 games, filling the role of left-handed set-up man while Sean Marshall missed most of the season with shoulder tendinitis. Duke started the season with Washington, made 14 appearances for the Reds at the end of the season and was 1-2 with a 6.03 ERA overall. Masset has been limited by shoulder problems the last two seasons.