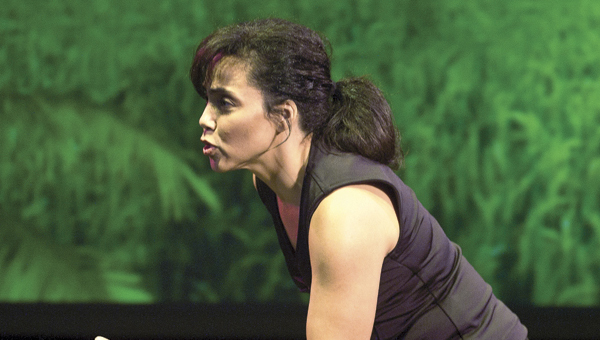 Mitzi Sinnott rehearses for a production of her one-woman show, “Snapshot.”

Ironton artist to have one-woman show aired on PBS

Mitzi Sinnott’s quest to put her one-woman show “Snapshot” on the big screen has gotten a step closer.

This month West Virginia PBS will offer two showings of a production of “Snapshot,” which Ironton-based Sinnott filmed in June. The first will be at 8 p.m. Nov. 10 and the second at 9 p.m. Nov. 26.

“Snapshot” is a multilayered stage production of a play Sinnott had written about her quest as a biracial child to understand a father struggling with mental illness, who dropped in and out of Sinnott’s life.

An advisory board Sinnott consults with on getting “Snapshot” produced as a feature film pushed to get the summer performance onto West Virginia PBS’s schedule.

“One of the things West Virginia PBS is trying to do is have more state-focused programs,” Sinnott said. “Picking up ‘Snapshot’ is in line with what they want to do.”

The actress-dancer-playwright is the daughter of Yvonne Sinnott, founder and creative director of Yvonne DeKay School of Dance in Ironton and the late Lorenzo Batts Jr., a prominent Huntington, W.Va., musician in the 1960s who was vocalist for the Explosive Dynamiks, a Tri-State pop music band.

Batts was drafted into the Army during the Vietnam War, just before Sinnott was born. While the three lived together as a family in Hawaii, mental illness slowly began its path of destruction for the young man.

Multiple hospitalizations at VA medical centers preceded Batts’ self-imposed exile in Hawaii, where an adult Sinnott finally met with the man she says haunted her during her childhood and teen years just before he died.

“One of the things we have not heard about on Vietnam is the perspective of the biracial daughter,” she said. “That was what was fresh and new. Something about my life makes sense to someone.”

In June Sinnott gave a special presentation of her show in Huntington that was filmed with the goal of pitching it to Hollywood.

That production is what West Virginia has picked up.

“To me PBS is the only television station that I watch,” Sinnott said. “When I realized my work is going to be on PBS, I cried, a whole lot.”

There are 22 million veterans of the United States Armed Forces living today and one of them will be the... read more