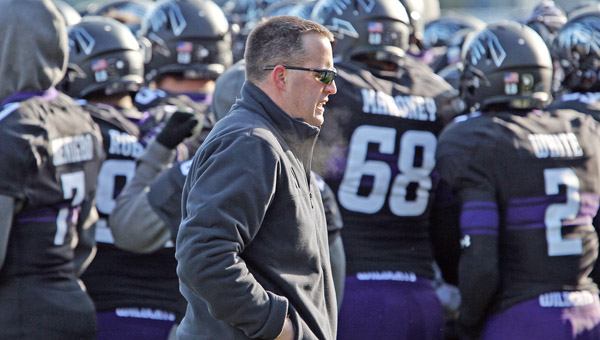 Northwestern coach Pat Fitzgerald said his team is one of many in the Big Ten in danger of not qualifying for a postseason bowl. (MCT Direct Photo)

INDIANAPOLIS (AP) — No. 4 Ohio State is chasing perfection and a chance play for a national championship. No. 18 Michigan State has the inside track to the Big Ten championship game.

Four other conference teams are bowl-eligible and Iowa could join that list with a win this weekend.

But with only four weeks left in the regular season, the Big Ten is looking at the possibility of coming up short in postseason play again — even before the bowl lineups are announced. With eight bowl tie-ins, six qualifiers and Iowa on the cusp, the last available spot will have to be filled by one of three teams that are a combined 1-12 in league play: Illinois, Indiana or Northwestern.

“I think it’s pretty evident to our guys that our backs are against the wall,” Wildcats coach Pat Fitzgerald said Tuesday. “We’ve had every opportunity to win four out of our last five games and unfortunately we haven’t coached our guys well enough or our guys haven’t executed well enough in games, especially in the fourth quarter, to win. It’s disappointing but with games left ahead of us, we have opportunities and really we just have to coach our guys to play better and if we do that, we’ll be all right.”

For the Big Ten, this is not an unusual predicament.

The league failed to produce enough bowl-eligible teams to fill its allotment four times it the last five years and it could happen again. The lone exception during that five-year span came in 2011 when conference officials had to find a bowl game to take the Fighting Illini because there were more bowl-eligible teams from the league available than actual game commitments.

A league spokesman wrote in an email to The Associated Press that Commissioner Jim Delany was not available for comment Tuesday because of meeting and his travel schedule. But clearly, this is not how the conference envisioned the final month playing out.

“We’re all trying to do that (win six), and we’re all trying to do better than that,” Iowa coach Kirk Ferentz said. “I think we really just try to get our guys focused on the week at hand. I think most coaches do that. That’s what it’s all about, so if you want to be somewhere good at the end of the season, then you have to handle each step along the way. If you do that, the more apt you are to be in a good place at the end.”

Most analysts expect the unbeaten Buckeyes and surging Spartans, the league’s two division leaders, to meet in Indianapolis on Dec. 7. The winner would become the first team other than No. 21 Wisconsin to win the Big Ten title game, ending the Badgers’ streak of three consecutive Rose Bowl appearances.

The Badgers, perennial powers Michigan and Nebraska and surprising Minnesota all have at least six wins, enough to fill out the New Year’s Day allotment with one team left over for a non-New Year’s Day game — the Buffalo Wild Wings Bowl, the Texas Bowl or the Little Caesar’s Pizza Bowl. Iowa’s best chance to join the club comes this weekend when it travels to reeling Purdue (5-4, 2-3).

But things could get tricky if the Boilermakers end a six-game losing streak. Iowa (5-4, 2-3) would then have to beat either Michigan at home or Nebraska on the road just to qualify.

Then there are other three:

— Northwestern (4-5, 0-5), once ranked in the top 20, is trying to get healthy during this week’s bye. It needs to win two its last three with home games against Michigan and Michigan State and a trip to Illinois.

— The Illini (3-5, 0-4) have lost 18 straight conference games, yet somehow still have a shot. How? If Illinois wins three of its last four — at Indiana, home against Ohio State, at Purdue and at Northwestern — it’s in.

— Indiana’s best chance may have evaporated with a fumbled lateral in the final 30 seconds last weekend. That mistake dropped the Hoosiers to 3-5 (1-3), forcing them to win three of their last four — home against Illinois, trips to Wisconsin and Ohio State, and the home finale against Purdue — to reach the six-win mark.

There could be a way out, though it’s a longshot. Last year, the NCAA opened the possibility of putting 5-7 teams in the postseason but only if there weren’t enough qualifiers to fill every bowl slot and then only if a school ranks in the top five of football’s Academic Progress Rate rankings.

The Big Ten can’t count on that, putting pressure on virtually every team in the league to keep winning — from division leaders trying to protect their leads to the Big Ten title game hopefuls needing help to the bowl-game hopefuls and even for a team such as Purdue, which is playing spoiler as it tries to avoid its first winless conference season in two decades.

“I think that’s part of football, part of life, there’s always pressure on you to succeed,” Illini coach Tim Beckman said. “We came darn close this last week (at Penn State) to having that first success, I want these players to feel those successes. So yeah there’s pressure on you each and every football game to be better, but in my opinion that’s how the programs that are being built get better is being able to succeed in those pressure moments.”

I have always been of fan of John Wayne movies, especially westerns. One of my favorite Duke flicks is “The... read more