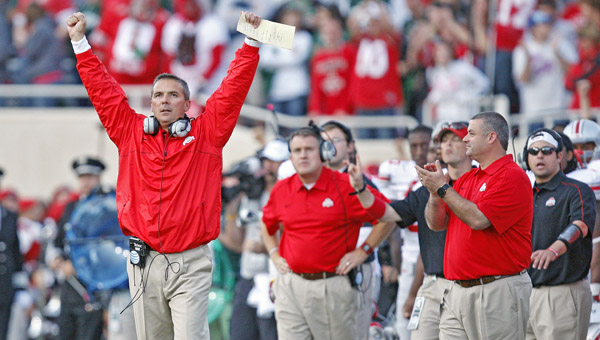 COLUMBUS (AP) — Heading into their final three games of the season, the fourth-ranked Ohio State Buckeyes go into an off week with almost all of their highest goals still within reach.

The thing is, they also need some help.

No wonder coach Urban Meyer will be watching TV closely.

“I’ve been there before a couple of times where some things had to happen right,” Meyer said after Wednesday’s rain-soaked practice. “For us to waste energy on that, that’s not fair to the players we coach. But we’ll certainly be watching.”

Meyer plans to watch Thursday night’s games with his son, Nathan. He’ll have plenty to watch, that night and Saturday.

Thursday’s games include unbeaten No. 5 Baylor hosting No. 12 Oklahoma for the Big 12 lead, and then No. 2 Oregon at No. 6 Stanford in a Pac-12 showdown.

Baylor is breathing down the Buckeyes’ neck in the Bowl Championship Series rankings, while Oregon is one of the three teams ahead of the Buckeyes.

“I’ll watch them both. Obviously I’ve got a lot of interest,” Meyer said during the Big Ten coaches’ call this week. “Oregon, the style of play that they have — we try to use some of their stuff, as much as we can, because I just think they’re really good. But I’m going to watch Baylor; they’ve got an exciting program too.”

Even though Ohio State (9-0, 5-0 Big Ten) is rolling through its schedule, the Buckeyes cannot play for the national championship if the status quo holds. At No. 4 in the BCS rankings, they need two of the three teams ahead of them to lose or drop behind them in order to be among the top two teams when the national championship pairings are determined in early December.

On Saturday, another game with huge ramifications for Ohio State takes place when No. 10 LSU plays at top-ranked Alabama.

Meyer said he will be measuring his own team by what he sees on the flat screen.

“That’s natural. I probably will,” he said. “I’ve done that with our staff. Is so-and-so a better coach than we are? Does so-and-so have better players than we do? Why? This is Ohio State, our expectations are the best in the country.

“Obviously we’re not there yet or we’d be the best in the country. So we’re fighting that right now.”

It’s a good time for Ohio State to take a break. The Buckeyes are a little bruised and battered and need to take a breather before embarking on their stretch run.

When they return to action on Nov. 16 at Illinois, they’ll be in the driver’s seat of the Leaders Division. They close out the regular season by hosting Indiana on Nov. 23 and then playing at rival Michigan at The Big House on Nov. 30.

If things work out, they’ll clinch the Leaders Division crown along the way — they’re up by a game on Wisconsin and also own the tiebreaker thanks to their 31-24 win Sept. 28.

They would then take on Michigan State — the Legends Division front-runner — in the Big Ten championship game at Lucas Oil Stadium on Dec. 7.

“All we can control is how we beat the teams we’re playing. First it’s Illinois, then so on,” he said. “I don’t stress over the things we don’t control.”

The Buckeyes need to fine-tune some things and heal their bodies.

Starting tackle Taylor Decker sprained the medial-collateral ligament in his left knee in the 56-0 victory at Purdue last Saturday. He is not practicing this week but it is hoped the week off will allow him to return to the field next week for preparations for Illinois (3-5, 0-4).

Center Corey Linsley said on Wednesday night that Decker may be resting but definitely will be able to play next week.

In addition, the Buckeyes are without backup tailback Jordan Hall. He has what Meyer calls a “chronic knee problem” and could not play against Purdue. He, too, is hopeful of getting back on the field for the big games at the finish.

The Buckeyes are riding a 21-game winning streak. The school mark is 22 straight, from 1967 to the last game of the 1969 season, encompassing a national championship in 1968.

Clearly, there’s a lot of goals yet to be achieved in the dwindling weeks.

Meyer, who stepped aside twice at Florida due to health issues, said he’s going to enjoy this week off, and hopes his team comes back rejuvenated.

“The chase is on, man. It’s real,” he said. “For the coaches, it’s the same thing. It’s good for your soul, good for your mind to come back refreshed. You can’t just (work all the time). I’ve tried that. It doesn’t work.”