Speaker talks about being a soldier 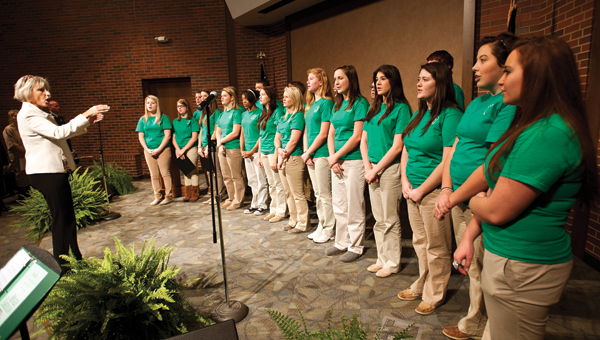 Sgt. Shane Hatfield is no stranger to danger. He has served in two branches of the military and between those two stints was an officer with the Portsmouth Police Department.

Hatfield was the keynote speaker at the seventh annual Hon. Frank J. McCown Lecture Series Veterans Tribute at Ohio University Southern on Thursday. He addressed what being a soldier means to him and what it means to enlist.

“It doesn’t matter what uniform you wear or what job you have,” he told the crowd. “When a person joins the military and takes the oath, he is writing a check. A check payable to the citizens of the United States, and freedom has no price.”

The event opened with the Ironton High School Varsity Singers, under the direction of Kathy Price, singing the national anthem. The crowd was then led in the Pledge of Allegiance before Interim Dean Dan Evans made opening remarks.

He thanked all veterans who attended the event and briefly discussed the history of Veterans Day.

Hatfield was a U.S. Marine from 1993-2000 and went on some humanitarian missions, but never saw combat because there were no wars going on at the time.

“What made me join to begin with happened when I was 15 years old,” he said. “I was a counselor at a 4-H camp. Everyone joined together and said the Pledge of Allegiance and immediately after that Lee Greenwood’s ‘God Bless the U.S.A.’ played. I told myself, ‘That’s it, I’m in.’ I joined the Marine Corps when I was 17.”

Hatfield said the United States is the best country in the world and he felt compelled to do something.

“Being in the military, for me, is about three things,” he said. “Defending our freedom, giving back to my country and securing the future. That’s why I joined.”

Hatfield added although things may seem rocky in Washington, D.C., the country will pull through, “we always do,” he said.

Hatfield then recognized veterans who served in each war or conflict from with World War I to Afghanistan. He then asked for a moment of silence for “those who served, those who are serving and those who didn’t make it back.” He said there are 10,000 soldiers currently deployed.

The IHS Varsity Singers then sang “In Flanders Field” and Wymer made closing remarks.

“The cost of freedom is high,” Wymer said. “We can’t afford to forget those who pay it.”

LEDC goes for $3M to pay for wish list park

Having a research and development park at The Point may be a dream for economic development leaders, but that isn’t... read more