From Appalachia to Atchafalaya 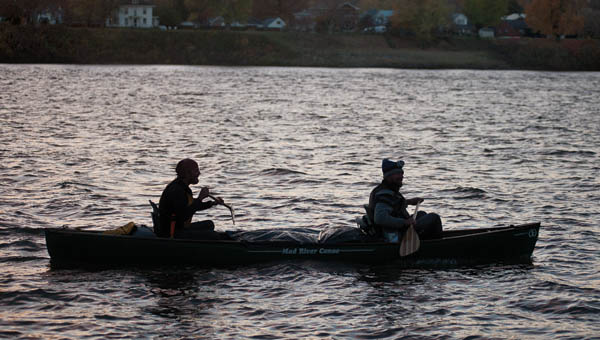 Ned Savage and Clark Chapman make their way to the Center Street Boat Landing during their excursion on the Ohio River.

A brisk and cold wind was blowing along the Ohio river Thursday as the sun descended behind the horizon, Clark Chapman and Ned Savage were rowing their canoe straight into that wind.

Since Oct. 14 the canoeing pair has paddled through all types of wind, weather and scenery, but this time was different. Sitting on the shores of the river was a group of family and friends waiting to welcome the duo to Ironton.

“My family is from here,” Chapman said. “Both sides, my mom’s and my dad’s, are from Ironton. So this stop is a little different than the rest of the stops we’ve made, it’s going to be great to visit with my family.”

Chapman’s visit will be fairly short-lived, as he and Savage will once again be out on the river as they head for New Orleans.

“Today was day 25 of our trip, and we still have about 1,500 miles to go,” Chapman said. “We’ll be traveling some more on the Ohio, then hit the Mississippi and ride it into the Gulf (of Mexico).”

The two started their journey in Boone, N.C., on the New River, traversing it all the way up into West Virginia, before hitting the Kanawha River and most recently the Ohio. Chapman says an adventurous streak and a heaping helping of curiosity sparked the idea behind the trip.

“Just a heavy does of inquisitiveness,” he said. “Like I said, my family is from here and I thought it would be neat to kind of come and visit Ironton by using a route that has been used for hundreds of years. Even long before Europeans settled in America.”

The history of the rivers, and the role they play in American life and culture also factored into the decision to make the long tributary trek.

“We are traveling on some of America’s biggest and most important rivers like the Ohio and Mississippi and also one of the oldest in the New River,” Chapman said. “I mean Ironton, and every town up and down these rivers are here because of the river and its ability to provide food, transportation or whatever.

“On the other side of these floodwalls is a very important piece of Americana, we just want to remind people of that and raise awareness to that.”

Along the way the two friends have paddled hundreds of miles, slept in dozens of state parks, and experienced parts of America’s landscape from a perspective that few have in recent history.

“It’s all about perspective,” Chapman said. “To see this part of the country from this point of view, I mean we are really getting a unique glimpse into two intriguing and important American subcultures in the Appalachian culture and the Atchafalaya (Cajun) culture.”

They’ve also experienced the famed Appalachian hospitality, and acts of kindness from people they have meet during the course of their journey.

“Everyone we’ve came into contact with has been awesome,” Chapman said. “When we were on the New River, Adventures on the Gorge heard what we were doing and gave us a free whitewater rafting trip. It was great. But it was just one of the many incredible displays of kindness we’ve ran into.”

The paddling pair also has a message of conservation they hope resonates with the people who hear of their river excursion.

“I just want to tell people to stay vigilant when it comes to taking care of the rivers,” said Savage. “They are so important to our lives, to our cultures, take an initiative and try to help keep them clean and alive for the future.”

They hope to conclude their voyage by New Year’s Day and Chapman says once the trip is over he hopes to write an account of the odyssey.

“I’d like to do some kind of writing,” said Chapman. “Just detailing what this experience has been like, what we’ve seen, I don’t know exactly what I want to do, but I would like to do some writing about all of this.”

For more information about Chapman and Savage or to keep up with their travels, visit www.facebook.com/Appalachia ToAtchafalaya.