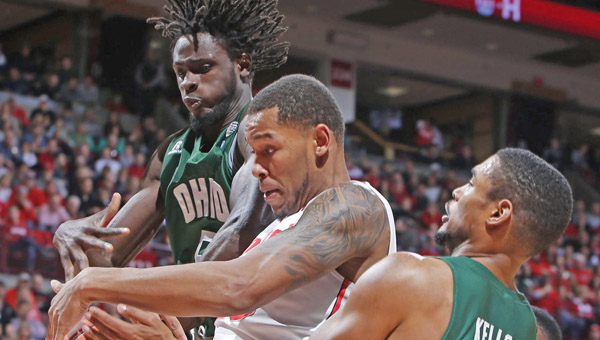 Maurice Ndour (5) and Nick Kellogg (15) of the Ohio Bobcats compete with Amir Williams (23) of the Ohio State Buckeyes for a rebound by at Value City Arena in Columbus on Tuesday. Ohio State held on to win 79-69. (MCT Direct Photo)

COLUMBUS (AP) — Lenzelle Smith Jr. was explaining something that went wrong for No. 10 Ohio State in its 79-69 victory over in-state rival Ohio on Tuesday night.

“We weren’t hitting wide-open shots and the game just got real ugly,” he said.

In terms of fouls, continuity, pace and adjusting to the new emphasis on no hand checks or physical play — not just missing shots — it was really ugly.

Aaron Craft scored 18 points — including eight free throws down the stretch — to help the Buckeyes hold off their neighboring rivals.

The numbers weren’t pretty: The teams combined for 55 fouls and 72 free throws, five Bobcats fouled out and there was seldom much momentum either way because of a drumbeat of stoppages of play due to foul calls.

“You have to adjust,” Ohio coach Jim Christian said. “It (the new emphasis on whistling most contact) obviously gives the offense a lot of advantages, especially Ohio State, which has four guys on the perimeter who are constantly coming at you. It puts a lot of pressure on your defense in one-on-one situations.”

Amir Williams had a career-high 14 points and matched a career-best with 10 rebounds for the Buckeyes (2-0), while reserve Sam Thompson had 12 points and LaQuinton Ross added 10.

Ohio State built a 12-point halftime lead and never trailed, although the Bobcats (1-1) cut the gap to five points with 4 minutes left.

Down by double figures most of the game, the Bobcats got back into it in the closing minutes behind the play of Stevie Taylor and Nick Kellogg, both from Columbus, who both scored 21 points.

Trailing 64-53, Kellogg hit a reverse layup in traffic before Craft missed a layup at the other end. A long pass led to Taylor’s three-point play that cut it to 64-58 with just over 5 minutes remaining.

“Nick and I are roommates,” Taylor said. “We talked about just coming home and playing solid, doing whatever it is that Coach wanted us to do. We did a good job of that.”

After a free throw by Craft, Maurice Ndour hit a follow shot to cut it to 65-60. Williams then tipped in a miss by Ross. Off an Ohio miss, Craft hit two more foul shots to push the lead back to 69-60.

Still, the game wasn’t firmly in hand until Shannon Scott drove the left baseline and flipped a pass to the right corner to Smith who hit a 3 with 2 minutes remaining for a 74-64 lead.

Ohio State coach Thad Matta did not tell Craft to drive to the basket in the waning moments. It just seemed that way.

“There was nothing specific said,” Craft said. “With the way they were calling it, and we were in the bonus pretty early in the half, we just wanted to be as aggressive as possible. Fortunately enough, we were able to get to the free throw line. We need to make a few more, but that’s definitely what won it down the stretch.”

It appeared Ohio State might just run away and hide at the beginning. With the Bobcats looking hesitant and nervous, the Buckeyes ran off the first nine points and held Ohio scoreless for the opening 6:32 until Taylor finally broke the ice on a drive.

With the constant barrage of fouls preventing either team from building any momentum, Ohio State built a 24-7 lead by the half’s midpoint. But with Taylor scoring six straight points the Bobcats drew within 28-20.

The Bobcats stayed within range the rest of the night.

There were connections everywhere. Former Ohio State star Clark Kellogg was in the stands dressed in Ohio’s green and white to support his son. Matta and Christian, had even been on the same Miami (Ohio) staff briefly during the 1994-95 season.

“Hopefully we can learn from this,” Matta said. “We weren’t as sharp as we needed to be and maybe it was a little too easy early. But I thought down the stretch we made some big plays.”

COLUMBUS (AP) — It appears that Ohio State wide receiver Evan Spencer won’t be speaking to reporters for quite a... read more