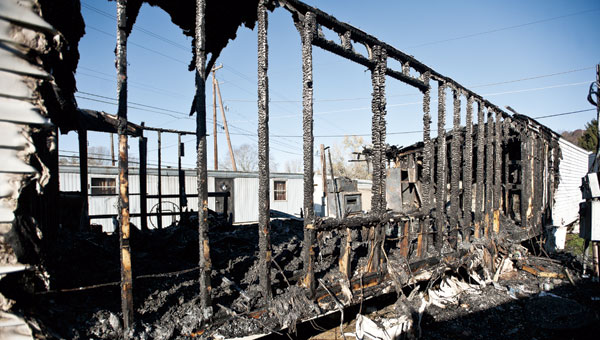 A neighboring trailer can be seen through the charcoaled remains following an early morning fire that destroyed a mobile home in the Sheridan Area. No injuries were reported.

SOUTH POINT — A fire around 5:30 a.m. Wednesday destroyed a mobile home and damaged two others.

The fire occurred in the 400 block of Country Road 1 just outside the village limits of South Point and was reported by neighbors.

“When we came up the residence was about 80 percent engulfed,” Perry Township volunteer fire department chief, Dewey Derifield said. “We couldn’t save it but we were able to keep the damage to the neighboring residences to a minimum.”

Derifield says that the help from the fire departments at South Point and Coal Grove were instrumental in controlling collateral damage.

“We really appreciate the help from those other departments,” he said. “If it wasn’t for the help we got from them we wouldn’t have been as successful. It was a cold night so the extra water from those departments was really needed.”

No injuries due to the fire have been reported and Derifield says as of right now what started the blaze is unknown.

Tussey wins contest;  song will soon be on iTunes Statistically, the odds of becoming a famous singer are one in... read more