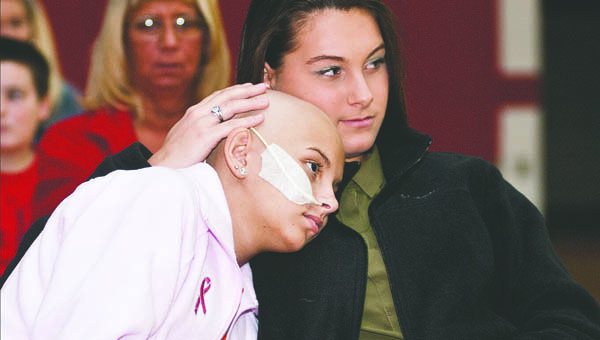 Laken Short offers a shoulder to lean on to her friend Ashley Dennison during the National Honor Society Fashion Show benefit event at Rock Hill Saturday. The event was held on honor of Ashley whom is battling cancer.

A fashion show fundraiser at Rock Hill High School on Saturday served its purpose while simultaneously doing much more.

“It’s amazing how kids come together,” Zornes said. “There are no dividing lines in the community when it comes to helping someone. The fact our kids can be so selfless and empathetic is just great.”

Cheerleaders from around Lawrence County volunteered to walk in the show for Dennison, who is also a cheerleader.

“Cheerleaders have a bond,” Zornes said. “Everyone did a great job and it was really special for the girls.”

Zornes also thanked the models’ escorts, although she admits it wasn’t a difficult task to find boys willing to fill such a role.

The fashion show was another event in an ongoing series of fundraisers for Dennison, who is undergoing chemotherapy treatment for cancer, and she was there supporting her fellow cheerleaders just as they were supporting her.

“She is an angel,” Zornes said of Dennison. “It was nice to see her smile and be happy for a while. She was so bright and cheerful. This was just as much about coming together for Ashley as it was about raising money.”

Rock Hill’s involvement in fundraising for Dennison went beyond cheerleaders and began before Saturday. Rock Hill’s A-Team collected money at a recent football game and Redmen sixth-graders and their teachers collected donated items and made gift baskets that were then raffled at the event. The baskets accounted for $515 of the $1,100 raised.

Rock Hill student Laken Short also received praise from Zornes. Short approached RHHS Principal Dave Hopper and told him she wanted to do something to help.

“She reached out on her own,” Zornes said. “She’s not a cheerleader but she wanted to help anyway. These are the kinds of things that happen and it makes you know people really have it in their hearts to help.”

Stylists Rachel Russell, Lorrie Kingery and Shauna Nixon from A New You Salon and Spa in Ironton did the models’ hair for the show and Kelly Vanderpool Lutz from Sweet and Sassy Treats donated her time as well. Ed Tilley and Tim Blagg — with help from students — put the stage together and Rex Lawless catered the event. Veronica Justice served as the event’s master of ceremonies. The models’ clothes were on loan from local businesses.

Mark Nixon presented Dennison with a “Gift of Hope” before the event concluded.

Donations can be made to an account called Ashley’s Anchors at any WesBanco location.

SOUTH POINT — The holiday season is a time of family fellowship and merriment, but for those who have recently... read more