With the Buckeyes possibly being boxed out of title race, Meyer says BCS system flawed 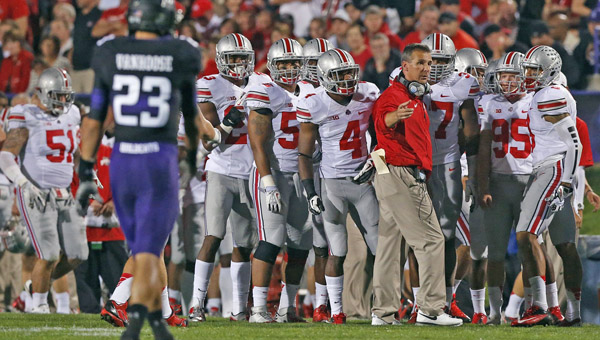 Ohio State Buckeyes’ head coach Urban Meyer talks with his team on the sidelines during the Northwestern game. Meyer complained that the BCS system is flawed. (MCT Direct Photos)

COLUMBUS (AP) — The Bowl Championship Series has been good to Urban Meyer.

He led two Florida teams to national championships under the format in the 2006 and 2008 seasons. Each time the Gators lost a game in the regular season, but still played for the BCS title.

But now that he’s the head coach at Ohio State, and his unbeaten team could be on its way to being boxed out of the national title race, he’s looking differently at the how major college football determines which teams play for the championship.

“Without spending much time on it, because it’s not fair for our team to do that, I will say this: I think it’s a flawed system,” Meyer said Monday when asked about the BCS.

There was a time, Meyer said, when the BCS filled a need in college football. After years of criticism and outright hatred of the BCS, it will fall by the wayside after this season and will be replaced by a four-team playoff in 2014.

“When you logically think about it, what the BCS people have done, which obviously we’re all part of it, I think it was great for a while,” he said. “I think it took an imperfect system and did the best you can without a playoff.”

Maybe it’s the passage of time, or maybe it’s Meyer’s changing perspective, but it’s clear he welcomes what comes next. So far, anyway.

He recognizes that a playoff doesn’t mean the complaints and sniping will end.

“There’s going to be controversy in playoffs, too,” he said. “There’s not a 64-team playoff. You’re going to have four (teams). What is that fifth team going to feel like?”

That fifth team will feel left out — much like Meyer and his Buckeyes do these days.

Ohio State (10-0, 6-0 Big Ten) has won a nation’s best 22 games in a row but is ranked a distant No. 3 in the latest BCS rankings — far behind top dogs Alabama and Florida State and barely ahead of Baylor.

If neither Alabama nor Florida State loses before the last BCS rankings on Dec. 8, the Buckeyes will be shut out.

And with unbeaten Baylor breathing down the Buckeyes’ necks, there’s a distinct possibility that Ohio State might not even make it into the top two spots if a big upset takes place in front of them.

It’s no mystery why the Buckeyes are on the outside looking in, even though they have not lost since Meyer left the ESPN broadcast booth to take over the troubled program in late 2011.

The Buckeyes are third in both the Harris Interactive and USA Today polls, which are factored into BCS system. The six computers which also are a part of the BCS have Ohio State a combined fifth — behind both Baylor (9-0) and one-loss Auburn (10-1).

Strength of schedule hurts Ohio State since most observers believe the Big Ten is in the midst of a down cycle.

On top of that, the Buckeyes have not played a team ranked in the AP top 15 in Meyer’s two seasons.

The Buckeyes played three ranked teams while going 12-0 in 2012 — and none were inside the top 20 in the Associated Press poll (Michigan State and Michigan State were each No. 20 when they played the Buckeyes, Nebraska was No. 21).

It also hurt that, due to violations committed when Jim Tressel was the head coach, the NCAA ruled they could not play in a bowl game and, therefore, were deprived of another quality opponent on a big stage.

This year, Ohio State’s lone ranked opponents have been No. 23 Wisconsin and No. 16 Northwestern, relatively close games that the Buckeyes ended up winning 31-24 and 40-30. Wisconsin is up to No. 16, but Northwestern has fallen off.

Top-ranked Alabama, meanwhile, has beaten three teams currently ranked, No. 9 Texas A&M, No. 18 LSU, No. 24 Mississippi, and has a date in the Iron Bowl against No. 6 Auburn coming up.

Florida State has beaten No. 7 Clemson (No. 3 at the time), and Miami and Maryland were both ranked when they played the Seminoles, but aren’t any more.

Many of the Buckeyes faithful think their team doesn’t get a fair shake for beating up on the Big Ten. But there is also a theory that maybe no one knows what to truly make of the Buckeyes because they’ve rarely been tested.

Ohio State offensive coordinator Tom Herman was asked about frustration with the BCS.

“It was like last year, everybody said, ‘Is there frustration you can’t go to a bowl game?’ No, we knew we couldn’t go to a bowl game in January. We’ve known about the BCS for the last 15 years. We know this is the system we play in and these are the cards that are dealt. …

“But it’s out of our control. So we can just go win games, play as well as we can and keep getting better every week.”

CINCINNATI (AP) — Linebacker James Harrison was asked if he’d ever had a moment like the one safety Tony Dye... read more