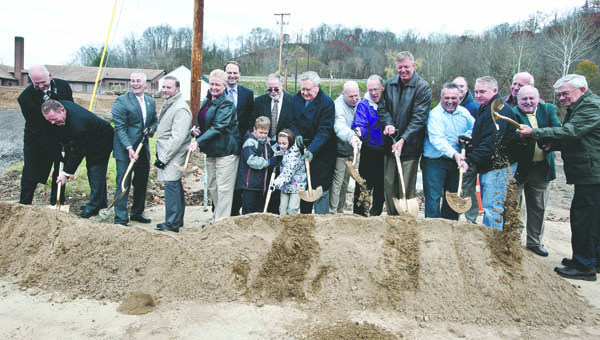 Idle bulldozers sitting on a construction site served as the backdrop at a groundbreaking ceremony for the first phase of Ironton’s Gateway Center on Tuesday.

A Holiday Inn Express and Suites and Frisch’s Big Boy will open next year at the site and hotel and restaurant personnel joined community leaders and elected officials in praising partnership as the catalyst for the project.

“It’s a matter of redeveloping the city’s primary interchange and putting in things we need in the community,” Ralph Kline, assistant executive director of Ironton-Lawrence County Community Action Organization, said. “This project supports the development of downtown Ironton and helps everything grow together and complement each other.”

Kline said the Gateway Center is a “New Town” development, which allows for a more environmental and pedestrian-friendly design. Kline credited the partnership among the county commissioners, the City of Ironton, the Lawrence Economic Development Corporation (LEDC) the port authorities and the CAO to secure the land and bring in the developers as of the utmost importance. He also said the state’s involvement was crucial for the Gateway Center coming to fruition.

“Having the state involved allows for the development of public infrastructure,” Kline said. “We can all expect numerous future announcements for this project.”

The Ohio Department of Administrative Services allocated $500,000 toward the $11 million project and a state Appalachian grant of $150,000 was awarded.

Ironton Mayor Rich Blankenship welcomed the businesses to Ironton during his address.

“We are witnessing a project many said would never happen,” he said. “It is a great day in the City of Ironton, good things are happening.”

Blankenship then told the youth in the crowd, which included students from St. Lawrence School who sang the national anthem that “this is a day you will remember for the rest of your lives.”

Ohio Valley Regional Development Commission (OVRDC) Executive Director John Hemmings said the goal of his office is to find “go” projects in the region and ensure they move forward quickly.

“This project,” he said, “is an example of why money from the state is needed.”

President of the Lawrence County Commission Bill Pratt spoke on the commission’s behalf.

“It may not be sunny and 75 (degrees),” he said. “But it is a bright day for Ironton and Lawrence County. Great things will happen because of these two business entities coming to Lawrence County.”

Executive Director of the Greater Lawrence County Area Chamber of Commerce Dr. Bill Dingus was the event’s master of ceremonies and he applauded those who worked diligently on this project.

“Ironton’s strong history is because of a few people who were willing to invest in it’s future,” he said. “This is the same kind of partnership.”

Ironton businessman Jim Kratzenberg introduced personnel from Holiday Inn and Frisch’s but not before reiterating the strong partnership among those involved.

“I worked with the LEDC on this project,” he said. “If anyone ever needs anything done, they are the ones who can make it happen. The people of Ironton will be proud of this development.”

President of MPH Hotels Inc. Mike Holtz has developed over 150 hotels and said he has never seen a community come together for a project like the City of Ironton.

“This is really a local project,” he said. “Most of the investment is on a local basis. We plan on being a great neighbor and being active in social and business organizations. We are honored to be part of this community.”

John Hunter of Frisch’s said he is excited that a Big Boy is coming back to Ironton.

“I wish we were open today,” he said. “I’m excited about. Now you won’t have to drive to Maysville or Chillicothe to eat at Frisch’s.”

Hunter said he expects the 172-seat restaurant to be a great business in the community.

Both businesses are expected to be open in 2014, Big Boy in the spring and Holiday Inn in the summer.

The Lawrence Scioto Solid Waste District has been selected as one of five host districts for an environmental law enforcement... read more