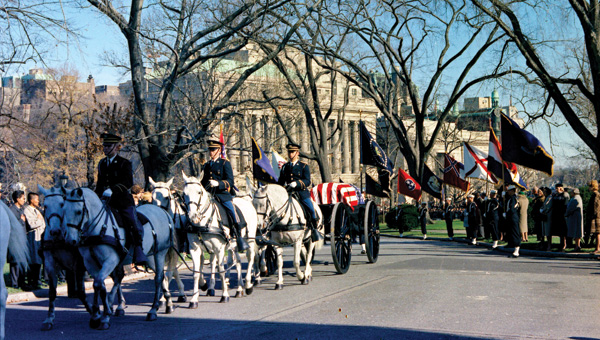 As the nation observes the 50th anniversary of President John Kennedy’s assassination, documentaries and interviews about the slain president abound.

Among those is an interview Kennedy gave after his first year in office. In it he states that Americans remembered where they were when Pearl Harbor was attacked and when President Franklin Roosevelt died.

Now Americans are recalling where they were when the youngest elected president was assassinated while part of a motorcade in Dallas, Texas, on Nov. 22, 1963.

“I was in a constitutional law class at 1 p.m. sitting next to (Ironton attorney) Craig Allen and the professor was Professor Van Alstyne,” Judge Richard Walton recalled.

The professor had just called on a student in the back row.

“The student said ‘I am too shook up. I can’t respond. The president has just been shot.’ ”

Walton said his first thought was that was the worst excuse for not being prepared for class he had ever heard.

“In our section there were 115 people and 105 heads snapped,” Walton said. “They didn’t turn. They snapped around to look at this guy.”

Quickly another student confirmed the tragedy.

“There was dead silence,” he said.

Class instantly ended as students scrambled to find the nearest TV to watch the events unfold.

“You immediately reject the idea because we think it can’t happen,” Walton said. “But we know it can.”

In a presidency that lasted for only 1,000 days, Walton said Kennedy’s presidency did have accomplishments from the starting the Peace Corps to the space program where the president laid out his goal of putting a man on the moon before the end of the 1960s. That became a reality six years after Kennedy’s death when Neil Armstrong walked on the moon on July 21, 1969.

“He recovered from the fiasco with the Bay of Pigs,” Walton said. “Then he did stand tall when the Russians who were putting their nuclear missiles into Cuba.”

As Craig Allen was a student in a law school class, his wife, Carol, was in front of a classroom in Johnstown teaching high school science. When word reached the school’s principal, all the teachers were gathered together and told the news before it was announced to the students.

“I was absolutely devastated,” she said. “Craig had worked as the president of the state’s Young Democratic Club during his college years and had helped elect President Kennedy. Both of us were pretty much involved in watching his presidency develop.”

Allen got in her car and drove to Columbus to spend the rest of the weekend watching television with her husband.

“We were watching television when (reputed assassin Lee Harvey) Oswald was shot,” she said. “It was history unfolding. I think Kennedy definitely accomplished things. He sent up an entire background of involvement in our country for us as citizens. He did much internationally setting up that picture board it was for us to follow. He didn’t live long enough to see all of it develop.”

Former state representative Clyde Evans had only been out of college about three years and was working as a counselor at Gallia Academy when he heard.

“I was sitting in an office and somebody came in and said the president had been shot,” Evans said. “I just thought it was a real shock. If the president can be killed, it challenges the stability of the government. The sickness you have out there that would cause that. Looking back he made tremendous strides in breaking down racial barriers. He had some ideals he was pushing for.”

The Rev. Charles Moran, pastor of St. Ann’s Church in Chesapeake, was still in seminary when he heard.

“I was at St. John Vianney Seminary playing volleyball and a faculty member came out a side door and told us he had been shot,” Moran said. “He was still alive supposedly and we went in to watch it on television. I can even tell you the names of the people I was playing volleyball with. My emotion No. 1 was that evil was trying to triumph, then comes Sunday and Jesus triumphs. Kennedy transformed many things, the ability of calling forth the people rather than the party. He went straight to the people. He really grew into the job.”

Proctorville Councilman and former clerk of courts Dale Burcham was working as tobacco salesman when he heard.

“I remember I was on Third Avenue in Huntington at the Farmers’ Market when they announced he had been shot,” Burcham said. “My immediate reaction was I thought he should not have gone to Texas to start with. It was a feeling that things wouldn’t be right. I was hurt. I was disappointed because I thought he was a great president. I had doubts when he was elected because he was so young, but he was really good. So young. His life was gone in an instant.”

Ohio Board of Regents Chancellor John Carey was only a year older than Kennedy’s 3-year-old son, John Jr. But the enormity of the tragedy eluded him.

“I remember being out in the yard and my mom telling me,” Carey said. “I didn’t understand it at all. I remember it happening. The funeral procession, but it looked like a parade to me. But it was very sad.

Years later when Carey was serving the county in the Ohio House he met Bob Forster. Foster was the Secret Service agent who taught John Jr. how to salute, leading up to that iconic photograph of the child saluting his father’s casket as it was placed on the caisson to go to Arlington Cemetery.

“It was a momentous time in history,” Carey said. “The president had an historic impact on the country. I think it is important that we remember.”

Fifty years ago President John F. Kennedy was shot and killed by Lee Harvey Oswald as his motorcade made its... read more