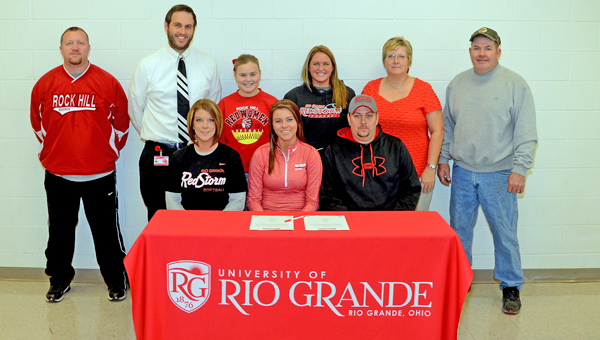 The Rock Hill Redwomen softball standout signed a letter-of-intent to play at the University of Rio Grande next fall, thus allowing her to direct her attention to her senior season.

“I can just focus on my high school softball, winning the (Ohio Valley Conference) and trying to go to the state (tournament). It takes a little of the stress of. I know what I’m going to do,” said Hanshaw.

Hanshaw has focused well on her high school game in past seasons. In fact, she was a Coaches’ Southeast District 13 honorable mention selection as a junior as she helped the Redwomen to a 14-10 record.

Hanshaw looked at several other schools such as Wooster and Shawnee State before settling on the RedStorm program.

“I looked at a lot of schools and visited them, but I just kept going back to Rio Grande. It’s small and it’s close to home,” said Hanshaw.

Hanshaw plays shortstop for Rock Hill but said Rio Grande head coach Kristen Bradshaw did not indicate where she fit into the RedStorm program. Hanshaw said she can play either shortstop or second base.

“If I work hard enough, I could see (playing early). I’ve worked for this all my life. I’m really confident,” said Hanshaw.

Besides the size and friendliness of the campus and its close proximity to home, Hanshaw said she was impressed with the team and Bradshaw as a coach.

“It’s a really good program. They work hard and (Bradshaw) pushed them and that’s what I like,” she said.

Hanshaw is the daughter of Amy and Ryan Hanshaw.

Jim Walker jim.walker@irontontribune.com   PORTSMOUTH — Once the Ironton Lady Fighting Tigers got their engine running, they didn’t slow down.... read more