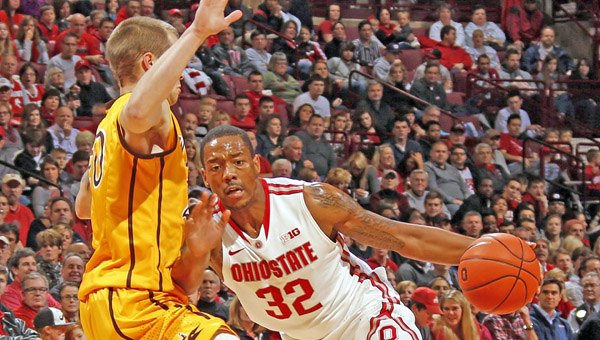 COLUMBUS (AP) — This has not been a vintage year for Aaron Craft on offense.

But with his team trailing in the second half, Craft took over and gave seventh-ranked Ohio State a lift down the stretch.

Lenzelle Smith Jr. scored 20 points and Craft had all 10 of his points in a second-half surge to lead the Buckeyes past stubborn Wyoming 65-50 on Monday night.

“Aaron really kind of took things over there,” coach Thad Matta said. “We went to him down the stretch and he was as good as he could be.”

Craft, who came in shooting 35 percent from the field without a 3-pointer this season, was scoreless and having another forgettable offensive game until he began driving and scored 10 of the Buckeyes’ 13 points during a 13-4 run that turned the tide.

“We came into the first TV timeout and just looked at each other and said, ‘Hey, they’re a great team. That was their run and now we’ve got to respond,”’ Craft said. “It really just kind of stemmed from our defense. We started guarding the ball a little better, getting stops, getting rebounds. Anytime we can do that, we usually get easy layups.”

Riley Grabau hit a pull-up 3-pointer on the break, Josh Adams added a three-point play on a dribble drive and then Larry Nance Jr. — son of the former Cleveland Cavaliers star — had a free lane for a rebound dunk. Matta called a timeout to try to get his team back in sync.

Whatever he said worked.

The Buckeyes stormed back, scoring the next six points to take a 45-43 lead on Craft’s second consecutive driving layup in traffic.

On the inbounds pass, Ohio State’s Shannon Scott got tangled with a Cowboy and appeared to shove him away with his forearm, resulting in a technical foul. Grabau hit both technical shots to tie it.

But Smith hit a 3 from the left corner to give the Buckeyes the lead to stay.

“I just took what the defense gave me,” Smith said. “I just kept thinking, ‘Keep shooting.’ I was able to knock down my first 3 and my team was able to get me the ball. I had some good looks at it, so from a shooter’s standpoint, I just caught it, had my feet under me and I let it go.”

Wyoming was poised for an upset until missing its last 11 shots and failing to hit a field goal over the final 10:01.

The Pokes scored just two points from the 13:06 mark until Nance, fresh from sitting out with four fouls, hit two free throws with 4:48 remaining.

Meanwhile, Craft — scoreless until midway through the second half — started getting close to the basket. He hit two free throws, slashed across the lane for a layup and then scooped in an arching shot over a defender’s outstretched arm to make it 54-45. After yet another Cowboys miss, Smith poured in a 3 from the right wing and the lead was too much for the Cowboys to challenge.

“Craft finally got on the board, lowering that shoulder and driving in for two layups,” said Wyoming coach Larry Shyatt, a Cleveland native who played at the College of Wooster (Ohio). “And then a corner 3 (by Smith). What was a four-point game turned into a 9- or 10-point game. Simply put, that was the difference.”

Nance Jr., who got a nice round of applause when he was introduced, had 17 points and 12 rebounds despite heavy foul trouble for the Cowboys.

“It was really cool to get back home,” said the Akron native. “Obviously, it’s like a dream come true playing on this court. I was really proud of the way our team played today. It was a great game by Ohio State.”

Despite the venue and the round ball, it was clear many in the crowd had not forgotten that Ohio State’s third-ranked football team is playing archrival Michigan on Saturday. Several times in the second half, the student sections joined in a rousing rendition of “We don’t give a damn for the whole state of Michigan.”

Many fans have wondered when the Buckeyes, who shot just 35 percent from the field in the second half and 41 percent for the game, will begin to pull away from teams. They have been stuck in some surprisingly close struggles so far.

“Obviously, we haven’t probably played as great as we’d want to,” Craft said. “But it’s November still. We’re only five games in. There’s a lot of basketball to be played. The biggest thing we want to do is come out every day and get better.”

COLUMBUS (AP) — In a weak moment, Ohio State coach Urban Meyer made a major blunder on Monday. No, he... read more