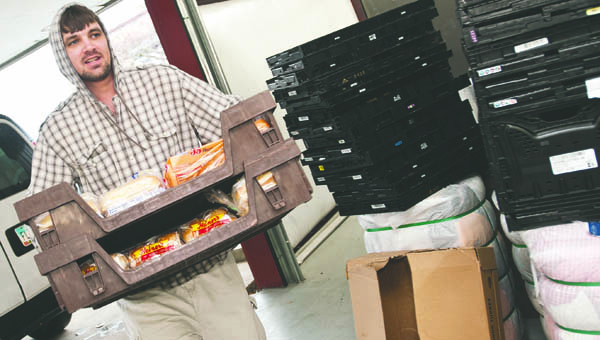 Todd Turkhorn hauls crafts of bread from the back of a truck to be given away during the Thanksgiving basket giveaway at Harvest for the Hungry.

Businesses, churches and individuals all donated money toward Harvest for the Hungry’s Thanksgiving food basket giveaway on Tuesday.

People were scheduled to pickup the baskets between 9 a.m. and noon at the pantry’s building on the corner of Fifth and Railroad streets in Ironton and administrator Diane Porter said the help with the giveaway has come from all over.

“We have gotten help from so many places it really has been great,” she said. “We have had some money donated through our Facebook page, too.”

Each basket includes stuffing, mashed potatoes, a turkey or chicken and dessert. People who received baskets did undergo a quasi-screening process.

“We interviewed people to see if they get food from other places,” Porter said. “We try to only give our baskets to people who truly need one.”

Emily Douglas started her nonprofit organization Grandma’s Gifts when she was 11 years old. Douglas lives in Columbus but says a majority of her family is from Ironton. She read about the Harvest for the Hungry food baskets in The Tribune and decided her organization would help.

“I started this in memory of grandmother,” Douglas said. “She grew up really poor and people used to donate food to her when she was young. She knew the benefit of getting food donated and taught me the same.”

Grandma’s Gifts previously donated a refrigerator to Harvest for the Hungry and for the basket giveaway supplied canned food, 700 pounds of apples and 40 turkeys. Volunteers Wes Lindenmuth, Ellie Adkins and Andrew Flannery accompanied Douglas on her trip to Ironton on Tuesday.

“When I was a kid, I was at Pick ‘n Save with my parents and a family was in front of us buying bread and bologna for Thanksgiving,” Douglas said. “I asked my parents why they were buying that for Thanksgiving. They told me they would tell me when we got to the car. Giving this food to people is a really good thing.”

All 200 baskets were given away to people who had a scheduled pickup time at Harvest for the Hungry.

Patrick Richard walks to his arraignment. One day after surrendering to the Ironton Police Department, owners of All Seasons of... read more